So I’m not dead, and I have been following along with y’all’s blogs, but typing one-handed sucks so much, commenting has been non-existent. I’ve been that silent stalker that brings your page views up, but clicks off without a trace.

Things are healing and I ditched the sling pretty quickly.

And the bandages were taken off last Thursday, where my dr said we’d talk about riding in FOUR MORE WEEKS. I fired him. Sort of. Ok, I didn’t.  Then yesterday a kid I tutor told me my arm looks like a “zombie arm,” so that was helpful. 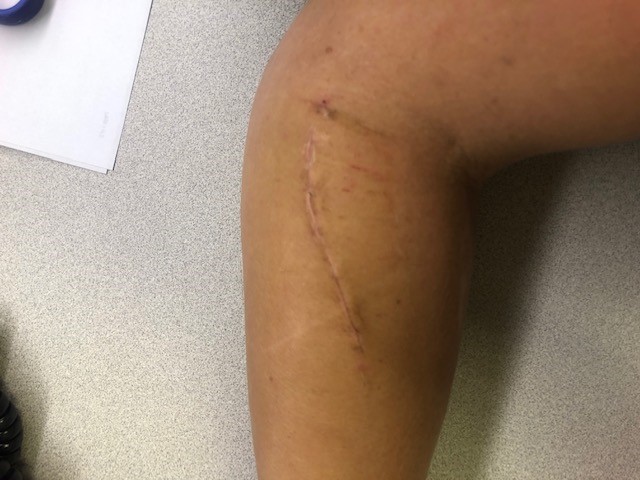 I started occupational therapy last Friday and the OT read me the notes my doctor put in. He legit warned her via my medical chart that I’d try to persuade her to sign off on me riding. Har har, Doc. Har har.

Leo has been bopping along in Florida, doing event horse things, such as HIS FIRST CORNER last week. Of course, no media exists of said event. Wish professionals were as media-obsessed as amateurs. Srsly.

And I haven’t really even been out to the barn (gasp), as much, choosing instead to spend evenings at Crossfit so that I can retain some semblance of fitness when I’m authorized to clambor back aboard.

AND we’re considering moving to the other side of town to be closer to all the things we do (such as the barn), so readying our house that we’ve lived in for 5 years + has endured 2 growing boys has been no minor feat.

I swore when we bought this house, I’d never move again. But that was before I was boarding where I am now, which is paradise-on-earth. The area we’re looking at has my barn commute time between 5-8 minutes, so bring on the home repairs! For Husband, that is. Obvi.

I will do my best to start commenting more on everyone’s adventures- keep ’em coming so I can live vicariously through you all for the next, um, FOREVER #Desperation

Me: I’ll probably get cleared by the doctor to ride next week! P: Oh really? Have you ever seen anything more pathetic than this bug-faced gimp? And not in a cute way 😡 #forevergallant