So when we left off yesterday, S had just rocked around the BN SJ and BN XC, and we were given the green light from Trainer B to go for all 3 phases in the show. 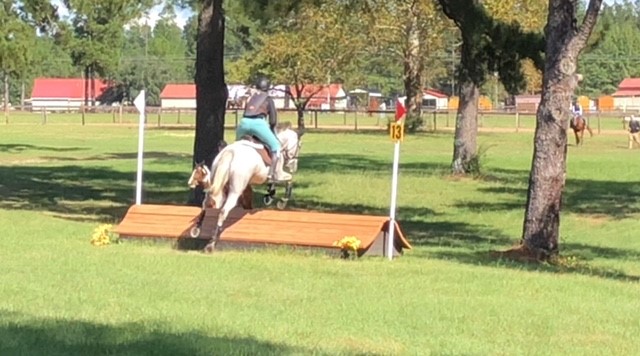 We had the bad luck of having an 8 AM ride time…super yuck. After a sleepless night (not due to nerves, just lots of bad stuff like neighboring truck alarms that wouldn’t turn off), I hopped on S about 30 minutes before our ride time. He was pretty unfazed about the crowded warmup, but would not/could not relax at the canter. This is something we struggle with at home as well, and I think was exacerbated by some tiredness. He was super stiff going to the left, and even to the right, which is normally decent, was lackluster at best.

I didn’t get a video, but at first he scored a 40.6, which put us in 2nd to last place. Some of it was earned- in the first canter he kicked footing onto the plastic boards and then decided he clearly needed to be closer to the quarterline to avoid such offensive noises for the rest of the test. His free walk was non-existent and BN A unfortunately has the free walk on the long diagonal and comes up really early in the test. Then I spent the 2nd canter circle just trying to keep him from breaking into the trot. The trot work was decent and we nailed our centerlines, though.

Except…the judge and C were NOT on centerline. When I went for the final centerline from K-X-G, I knew I was in the middle, so why was C to my right? When I came out of the arena, Trainer B said I rode centerline dead accurate, but the arena clearly wasn’t set correctly. 2 riders after me, someone said something and they moved C and the judge closer (it was apparently still about 2 feet off but better than before). So when I got my score sheet back and saw she gave us 5.5s for both centerlines with the comment “Not on CL,” Trainer B had me contest that. I did, and the secretary sent the score sheet back to the judge to see if she’d revise it. She did, but only gave us 0.9 points back, which changed my score to a 39.70. Not really fair, but whatever. I scored a 7.5 for Rider Position so that’s what I actually care about. 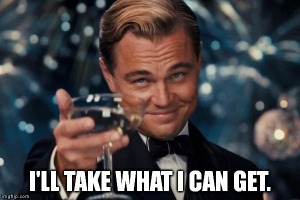 The other thing that didn’t work in our favor was the division we were put in. Normally recognized HTs have divisions like Open, Rider, and Horse, right? Well, at CHP they just do A, B, C, with no thought to experience. I had the luck to be in a division with 8 professionals (like Bonnie Mosser and Daryl Kinney). So not really too much of a hope for me and greenbean S, but luckily we weren’t there for dressage anyway. 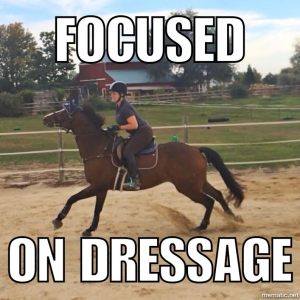 I got back at 1:15 to warmup for SJ, which thankfully was not nearly as crowded or eventful as the day before. He jumped well when I rode well, which is fair, and we worked on adjusting his canter, which is another struggle (but getting better as he gets stronger).

We went in, and I immediately rode over to the final jump, which was CHP’s “trick” for this show. Where for the schooling day you ended with a 2 stride, for the competition the designer took away the B element of the 2 stride and instead put up a vertical with a solid white panel about 6 strides away. There were countless close calls/stops/falls in the Training/Novice division at that fence, so I wanted to show it to S and hope he wouldn’t freak out.

But S didn’t even look at the fence. He was too busy staring at the crowd on the side of the arena, and the decorations they’d put up and seemed a little like his mind was blown. They rang the bell and I said a little prayer.

He was super to jump 1, and I fixed the turn from 1 to 2, but he backed way off of 2 when he saw all the commotion on that side of the arena and then backed off again to 3. When we landed off of 3 I said, “Sorry bud, but you’re going to get me in trouble if I don’t do this,” and gave him a fairly decent whack with the crop. It worked, so worth it 🙂

Besides a sort of crappy approach to 5 (he spooked at the tent on that side), he was super. He definitely looked at the last fence, but I calmly informed him when we landed off of 9 that he wasn’t going to stop and by then he had his listening ears on. So yay! Double clear!

So I hopped off, we changed out his boots, I strapped my vest on and it was time for S to put on his big boy pants and go XC.

He was MUCH calmer walking out to XC this time, but was not sure what to make of the start box. It had some decorations, the volunteer and his table, the garbage can, the signs flapping- very suspicious, that start box was to dear S.

We got counted down and he was a little hesitant on the way to the first jump, but cleared it nicely and we just kept rolling from there. He thought hard about 3, but a little wave of the crop on his right side kept him straight. My own right drift came into play on 5A, but I realized my error and got us straightened out.

Then it was the moment of truth- the water. Trainer B’s advice had been to gallop him at it so that if he broke to the canter or trot, he’d still be going forward. He gave a little stutter and dropped to the trot, but went in which was pretty much a miracle.

Then I made an error. He had lost so much power in the water that in hindsight, I should’ve circled in the water (which would’ve been allowed) to get him in front of my leg. Instead, I just continued on the route and by the time we got to the bench, he was so far behind my leg (and his stifle gave a quick lock when we exited the water), that he ran out at 9, the bench. Really not his fault- I believe if he’d had, oh, ya know, one iota of experience on XC, he would’ve made it over. I circled quickly back to it and he didn’t hesitate at all. 100% my own fault there.

The rest of the course was super easy for him. He hopped down the bank, then I trotted him down the hill as planned, and as we were doing so, I was sad it was about to be over. This is the reason people have multiple horses- so they can do this more than once. We made quick work of the last 3 jumps and came in like 30 seconds under optimum time.

At first, even with the 20 penalties, we had moved up to 9th out of 15, but when they posted the final scores, it appeared as if some other riders had contested their dressage scores and we ended up back in 2nd to last, excluding 2 riders who had falls. Doh.

STILL. This horse wasn’t even supposed to run XC.  Trainer B said it best when he told me he couldn’t believe I took a horse to his first event at BN after only riding him for 4 weeks. And I totally agree, I couldn’t really believe it either. 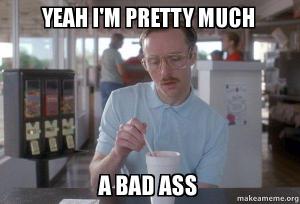 All the other horses did great as well. Trainer B won 3 divisions (of course), the Intermediate CT and the Novice with his own horses, as well as BN with a student’s horse; and another student was doing her 3rd BN and had double clear rounds. All in all, a very successful weekend. 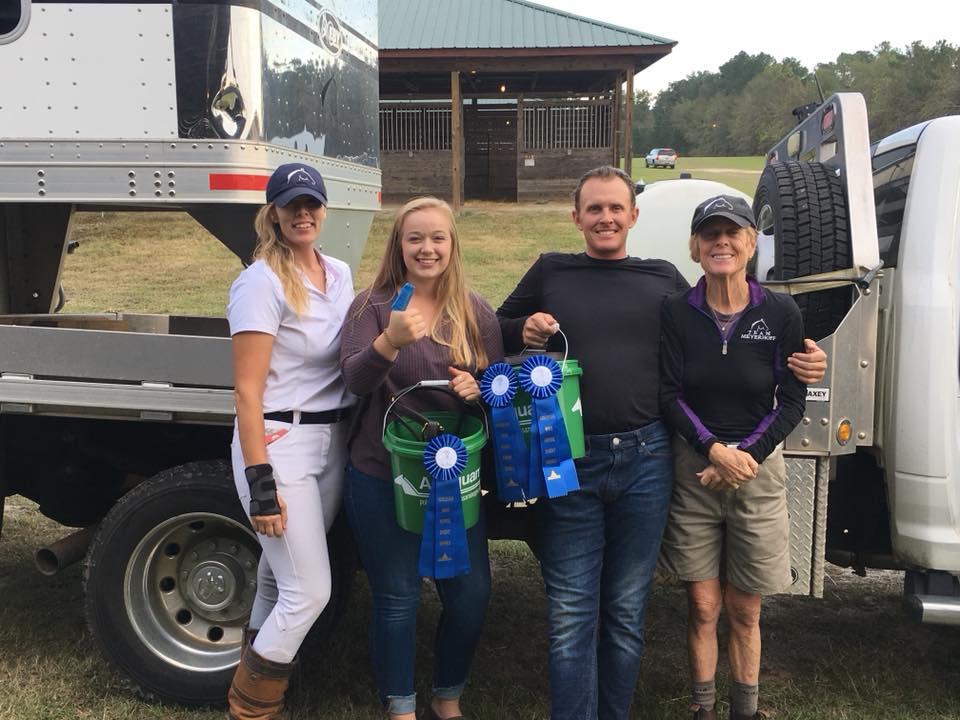 So next up on the schedule is a jumper show at the end of the month, and then as long as S is still around, we’ll be going back to CHP next month to run BN again and hopefully school some Novice.

Poor S had no idea all of what would entail when I started riding him- all he really wants is someone to scratch his ears. 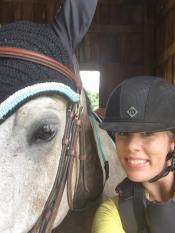