Last week sucked in a major way. We made the decision to put our 9 year old German Shepherd, Kaiser, down. He stopped eating a few weeks ago, was having a hard time getting around, and couldn’t control his bowels/bladder any longer. The vet couldn’t find anything clear-cut that was wrong with him, but suspected a stomach tumor. Due to his age and obvious pain, it was clear what he wanted, so we decided to have a vet come out and do it at our house, since he’s always been really anxious at the vet’s office. The last 10 minutes before she arrived, and when she pulled in the driveway I seriously considered throwing the check at her and telling her to leave. But we followed through and I’m glad he’s no longer in pain. Thanks for the 9 years, bud. 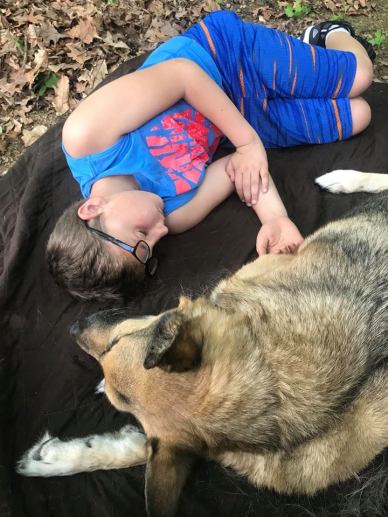 So that was terrible. Friday my non-profit was having our annual fundraiser, so I was running around from 8 AM-10 PM, having to smile, act happy, and do the small talk thing. Which as I’m sure you all know, is exhausting. So even though I always enjoy lessons at Trainer B’s, when I pulled in on Saturday, I really wasn’t in the mood. P hadn’t been ridden in 2 days, my hair was a mess from the humidity (I don’t know why I cared but I did), and I just wanted to be asleep. But we’re on a time crunch now that P is entered in Virginia. Trainer B is gone until this Sunday at Jersey Fresh, so when he gets back that means we have 10 days until we leave for VA. Yikes.

We decided to work out in the XC field this time, since there were finally some jumps back out there. P was not a fan of this tiny thing…he was freaked out over the black boxes, yet the thick side of the jump was also scary. So despite my wide open left rein, and my ever-squeezing right leg, we only succeeded in jumping half of the jump. #PilgrimLogic.

Then we moved on to a jump that gave P quite the pause last year.

And then Trainer B had us string those 2 jumps together and then continue down across the road, and past the dressage arena…somewhere we’ve never been and P considered this no-man’s land. I wasn’t wearing spurs, and while he didn’t stop at any of the jumps, he was quite sure we weren’t supposed to be crossing the road and was super sticky.

Going back he was much better…until we were supposed to take the train jump the other way around and he stopped. Which I cut out of the video, because I’ve got enough sucky things going on that I really didn’t need a reminder of the refusal. When I was editing the helmet cam videos, I clicked “trim” before getting to that part. I know it sounds dumb, but I don’t need the reminder.

I think Trainer B could tell I just wasn’t into it, and he offered to get on and school, which I gratefully accepted.

I was surprised P refused the one jump that he did- I really thought he was going to go. And that’s the frustrating part. Even Trainer B said it- he’s got the talent and the ability, what’s missing is the obedience. Maybe that will come with time; I mean, he’s certainly better now than he was just a short time ago when I couldn’t get him around a single course without multiple refusals. Plus I know I’m probably reading too much into it all, thanks to my current mental state.

So homework this week was to get P moving off of both legs. Short sessions that end once he responds by moving his shoulders or hindquarters over, based on where my leg is asking.

Monday I went out for session #1 and when I asked P to canter in the warmup, I was met with much sideways bolting and throwing of the head. Which was weird, so I asked again and didn’t release pressure until he went into the canter. I worked trot/canter/trot/canter until the behavior stopped and he was going into the canter without fuss. Since I was more conscious than ever to just to use my legs and seat, I deliberately was keeping the reins on the looser side. And it’s a good thing because when I hopped off…

Yep, that’s a cut. On the corner of his mouth and a little further up, and the bit must have been irritating him. Since I didn’t see it before tacking up (but I also wasn’t looking for one) I have no idea if it happened because of the bit caused it, or was already there and the bit being in just irritated it. I know I would’ve noticed it if it had happened the day before because I bathed him at Trainer B’s after our lesson. Soooo…..fun. I sprayed it with Vetericyn, smeared some Aquaphor on it, and cried a little on the way home. Don’t judge.

So what to do? Give him off until it heals? HA. Why do that when I can risk my own life but at least still exercise my  horse?

At least I know I’m using only my legs and seat, right?