What a weekend. I’m exhausted.

After showing at Carolina Horse Park last November, Trainer B wanted to try P in a rubber bit for XC to increase his boldness. I was a little hesitant because, well, brakes are important to me and P feels plenty bold (but nothing is ever forward or bold enough for Trainer B).

And then the winter from hell was unleashed upon us, with oh-so-little riding happening. 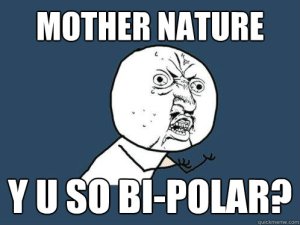 But with hopefully some XC schooling coming up, I asked a barn friend who consigns stuff for lots of people and can find ANYTHING, if she would scrounge up some thick rubber snaffles for us.

And barn friend delivered a few, including this guy:

I figured I’d better try it in the confines of the arena before just setting loose on XC with it. So Thursday I said a quick prayer and hopped on.

And, well, I was super surprised. After warming up, I tested his adjustability at the gallop for a few laps and he was, in a word, perfect. Definitely not as supple or bendy as he is in the KK, but the softness was there and I was given the impression that I had brakes. So we jumped around a few fences and he came back after Every.Single.Jump. Halt? Sure. Half halt? Yup.

Then I took him out of the arena and down to the hacking trail where these 3 XC jumps are lined up in an easy row.

We hopped through the line both ways and each time, P was majikal. We haven’t even been down to this part of the trail in months because it’s taken so long to dry out. So. It seems he’s a fan of the rubber bit. I’ll be testing it the rest of this week, though, to make sure the one day wasn’t a fluke.

Friday I headed to the Fork HT at Tryon to volunteer- my first time doing so! Thankfully, Bette was there also, so after we were done, we got some food, watched some 3* dressage and headed to XC to walk the courses. It was, uh, impressive to say the least.

The next day was our friend’s wedding- Husband was the best man and Noah was the ring bearer (a constant source of stress the last few months), so it was a busy day. But fun.

And yesterday was the Spartan race. I do these every year with my crossfit group, but this year BO wanted to run it, so we went together, along with another barn friend and one of her friends. And it was a blast! 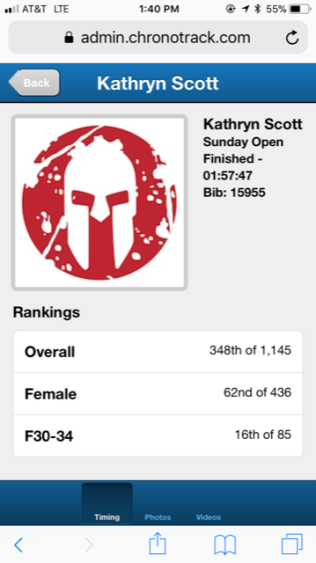 But now it’s a new week, and one that ends with a dressage show on Saturday, so it’s time to get riding again.

Meanwhile, Husband was hard at work last week. He was on spring break from the police academy, which meant he was at the barn all day errrry day.

First step was of course to clear everything out. I keep ALOT of stuff in there. 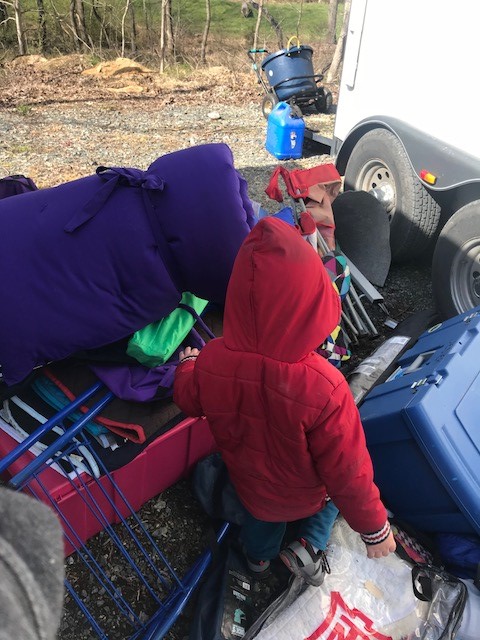 Most of the non-essential supplies went home to live in the garage for the duration of this project, but some of it needed to stay. So before I relocated it to the horse area of the trailer, that part had to get a good deep cleaning. Because it’s been awhile. I sprayed the whole thing down with a bleach/water combo, let it dry, then we hauled it to the car wash and into the RV bay, where I let Husband take over.

Then Husband took up the carpet. We expected this to be time consuming after reading horror stories about how hard it was to scrape up all the old glue, so were pleasantly surprised when we found no glue- just staples- making this take all of 10 minutes.

Then it was insulation time. Now THAT took a lot longer than expected- measuring, cutting, stuffing, then rinse and repeat ad nauseam. This was the point where the kids abandoned him in favor of the new rider lounge in the barn. P was jealous. 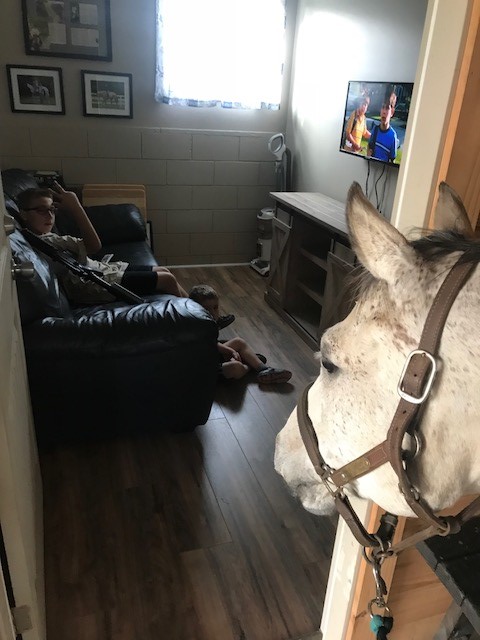 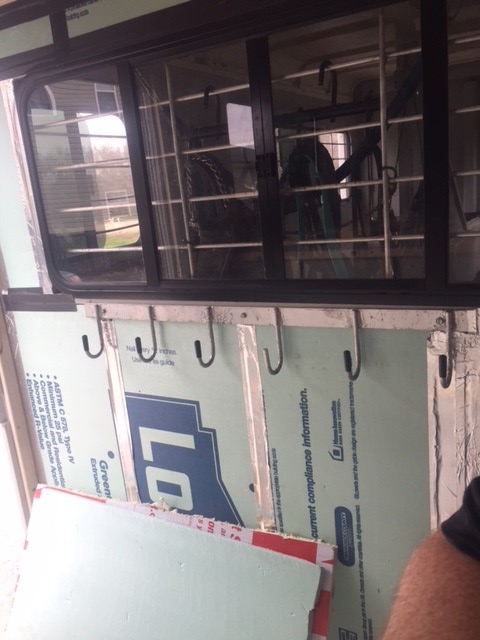 Next came the furring strips- Husband used 1x2x8 strips, and self-tapping screws to secure them to the ribs of the ceiling and the steel frame- these will be what the walls/cabinets/steps will be secured to. 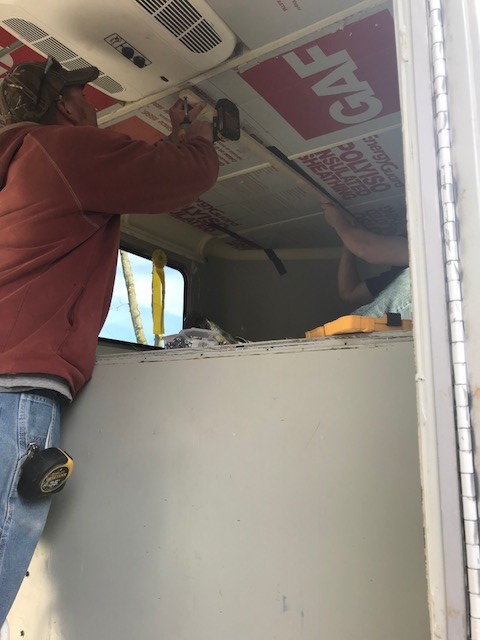 Then had to insulate in between the framing. MOAR CUTTING AND STUFFING.

Then the next day I get a text saying, “Is this what you want?” from Husband with a picture: 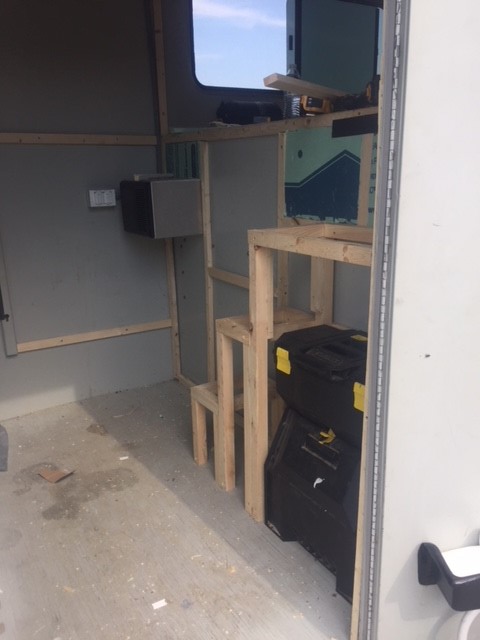 That’s not exactly what we talked about there, Husband.

We had TALKED about (and gone over sooo many pictures) of steps that doubled as storage. The lowest one would be a bench, and the other two would be cabinets, with the tallest one fitting my black Stanley travel cart. But the bench was important because it would double as seating. Because there will be a counter against the wall where the saddle racks were, so a bench would be built in seating for that.

Husband wasn’t so happy, but agreed to rip it out and start again.

I couldn’t decide what to do with the saddle rack part. The racks themselves were removable, but the column that held the racks was welded in there. The cabinet/counter that are going to go on that wall would have to have modifications to account for that, but on the other hand, in the (unlikely) event that I wanted to sell the trailer, maybe the next person would want to put the saddle racks back in. I hemmed and hawed over this and couldn’t make up my mind.

So Husband sent me this last Wednesday afternoon while I was at work:

My initial reaction was:

But really I NEVER use the saddle racks. And the trailer is a 2007, what are the odds that I’m actually going to sell it? Especially with all these upgrades….it’s not going anywhere.

And when I got out to the barn, the steps had been redone: 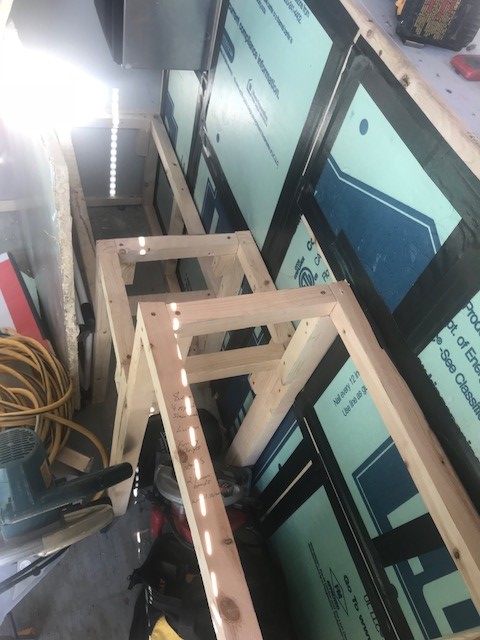 And the shelf in the nose had been started!

P & I both agree that it is now acceptable. 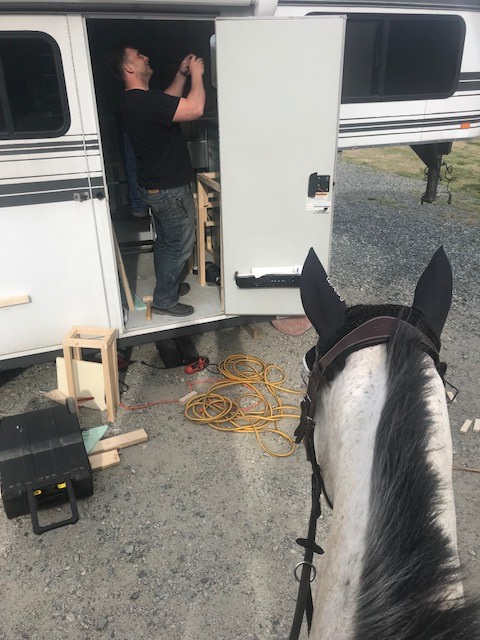 Unfortunately, break is over, so it’ll be back to nights/weekends, which means progress will be slow going to finish it. But the material for the walls and ceiling is in, so that will all be going in next!