My plans for world domination, aka, Windridge BN, were slightly foiled when Trainer B had to cancel his trip up here thanks to being shortstaffed. But no worries, we still somewhat remember how to jump (that statement may be slightly iffy) and at least we were kicking ass in our dressage lessons with Trainer J. And since she was coming to the farm Saturday before we left, we were going to run through our test and really be prepared.

Then the windstorm from hell was unleashed on us and P was like, “Horses are running! Dogs are barking! People are fixing fences! Things that happen every day are happening right now in the WIND!”

We had some nice moments: 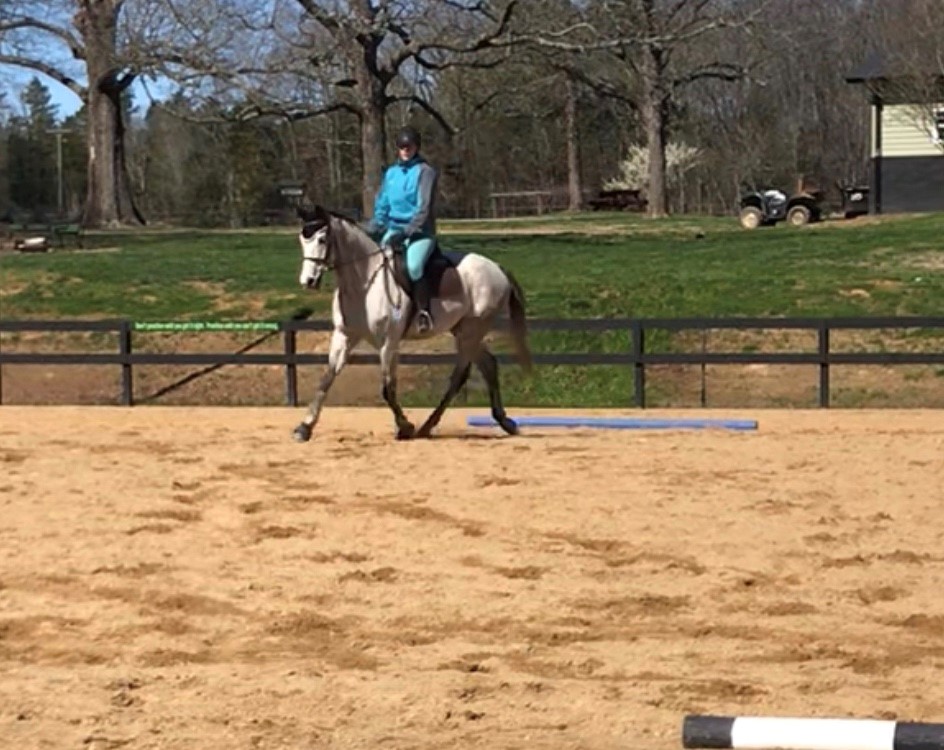 And some moves Trainer J has never seen (because P is usually trying to impress her). 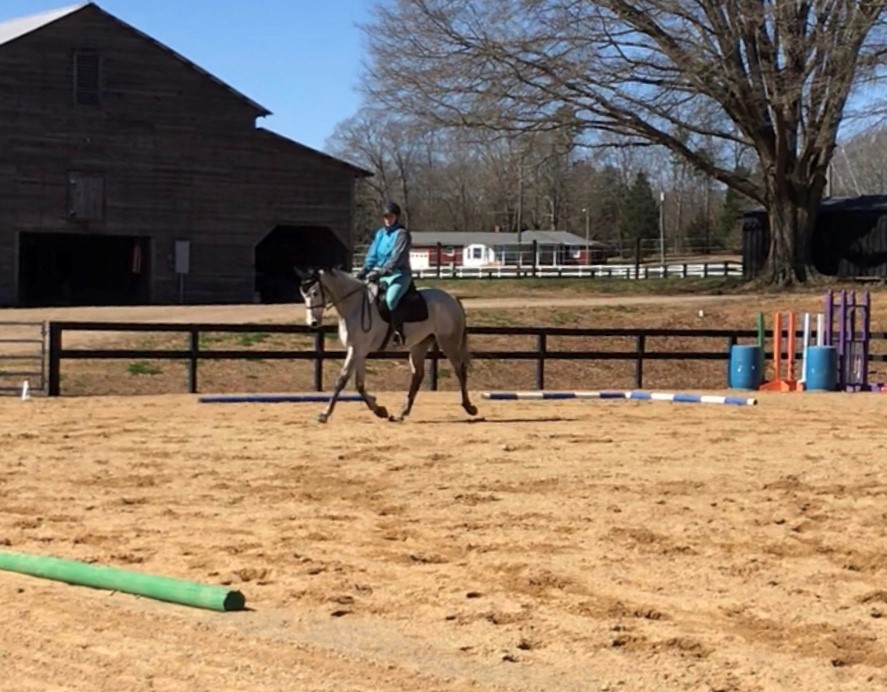 So then we headed down CL to run through the test. Sort of.

I just kept riding like nothing was wrong until we got to the first canter:

I said he was being an ass, but Trainer J noted that he was only exploding like that when we were going to the left and I was asking him for more engagement in his hind end. When we were just trotting around, he was fine, when I would ask for more bend, he’d get to a point where he couldn’t take it anymore. It had been super windy for a couple days now, and the horses had been running like idiots, plus he’s turned out 24/7 so it wasn’t out of the realm of possibility that he had tweaked something and was a little sore.

I figured I’d still head up to Windridge as planned and take it one step at a time. If at any point he seemed off, we’d scratch and go home. So off we went.

Even though P hasn’t been anywhere since December, he settled in like a champ as always. He ALWAYS does this with his water in a new stall.

And off I went to walk XC. And. It was BIG. By jump 3, Bette’s words had come rushing back to me that Windridge was beefy at any level. And they certainly make use of their extreme terrain. It was intimidating at the starter level, so by the time I got to the end I was wondering why I had thought this would be a good way to kick off 2018. Though I WILL say that on my coursewalk I saw some of the starter level jumps that previously looked unmanageable just a few short months ago and thought, “Awww, how cute those lil things are.” So I just kept reminding myself that 4″ more is NOT that big of a deal.

Right out of the start box, you got to jump 1. Small but wide (to me because I have a complex about the width of jumps).

Then you went up a steep hill and got to this cutie:

Then down the hill to the Aiken Rail.

And then down another hill, then up to the rolltop: 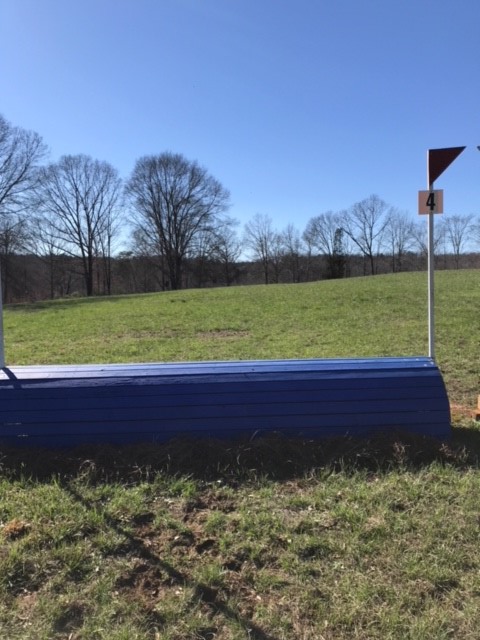 Then a right turn and up a super steep hill. Like, I was huffing and puffing walking up it. And at the very top, before it leveled out, was a ramp. Omg HOW could he jump a WIDE ramp going UP a hill? The terrain made this a boogey fence for me.

Then as soon as you passed that tree just on the landing, you had to make a sharp left, then right to get straight to 6. 6….I have no idea what it was about that fence, but it was terrifying. I couldn’t convey it’s terrifyingness in pictures, though. In pictures, no matter the angle, it looks like a harmless little box thing. IRL it was a death trap.

Then you made a right and went down a SUPER steep gravelly hill, that I planned to trot at least, possibly walk. Then back up the hill and around to a cabin P has jumped before: 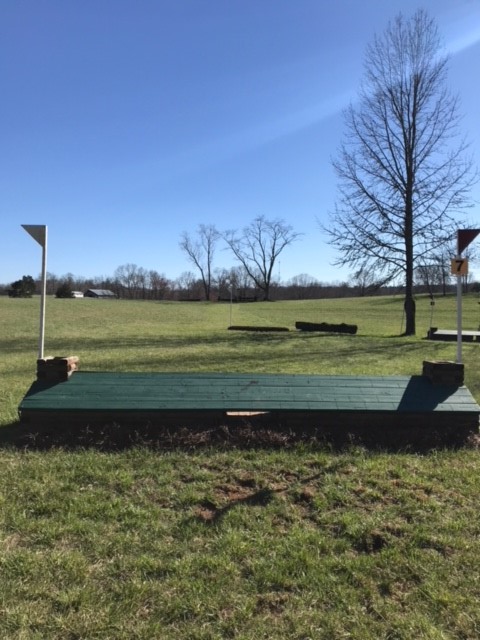 To a faux ditch:

Then you had to swing to the right, and up ANOTHER hill to the hanging log. P has jumped this one (the opposite way) so I didn’t think he’d have any issues with this either. 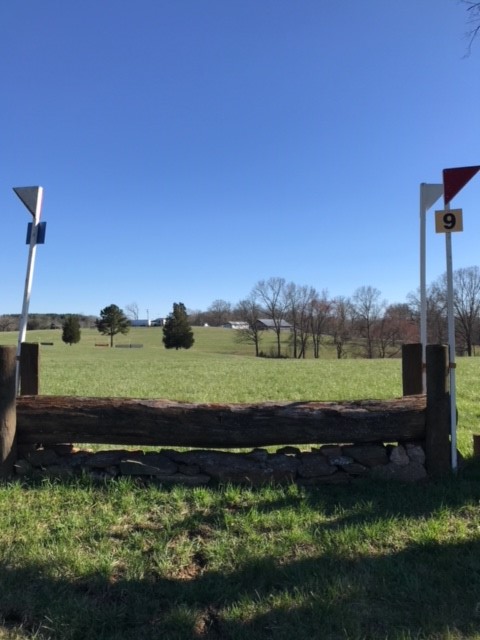 Then down through the water (or squeak between the edge and the flag). No concerns here, as P is excellent through water.

Hang a sharp right and over the step thing shared with Novice (N went the other way). We jumped the mini version of it for starter.

Then down the hill, to the left and over this boxy log on sticks:

Then make an immediate right and up the bank. The bank was at the top of another steep hill with no leveling out. Last time P went up this particular bank, he caught himself and knocked his boots down. Since we haven’t exactly practiced it since, I was envisioning having to readjust mid-course.

Then you had to arc out to the left and get to straight to this…object. Again, I couldn’t convey the horribleness of this thing in pictures. P has never seen a jump even remotely similar.

Then straight past the trees and over the steps:

Down the hill (sideways) and over the final table. Normally the table is what would’ve been the scary one for me, but I had so much trepidation over 5, 6 and 14 that I didn’t even give this one a second thought.

The next morning I lunged P like I always do at overnight shows and he came out looking pretty good. He was a little wonky going into the left lead canter the first time, but we were also on hills (seriously, there are no flat areas at Windridge. Even my trailer was tilted.) so I chalked it up to that. A couple hours later, we headed to dressage warmup and he was excellent. Picked up both leads just fine, was fairly calm, and had some nice trot and walk work.The judge liked us well enough and gave us a 30.3. We scored a few 7.5s and 7s, and got dinged for a couple things like the left lead canter she said was hollow and unbalanced, I didn’t make one of circles big enough, and I needed to maintain the connection in the free walk. Got it. That score landed us in 3rd place.

I had a few hours before SJ, so I went and walked XC 3 more times in an attempt to make the jumps look smaller. It worked somewhat, except for 6 and 14. Those still looked ridiculous. Finally it was time to get back on Mr. P for SJ.

About 25 minutes before my stadium time, I headed to warmup on a horse who, thanks to the wind suddenly picking up, was becoming more and more of a fire breathing dragon, and pointed him at what must’ve been a 2′ -2’3″ vertical. Suddenly it was “Bolt, leap, bolt.” Super fun. We did that a few more times until it was clear P was just riling himself up further so I took a walk break. And the volunteer running warmup goes, “They’re ready, you can head up now.”

Now. I’ve learned that the P I have in warmup is not necessarily the P I’ll get in the ring. P is notoriously bad in jump warmup, and I think it’s similar to his unflattering behavior while XC schooling in a group- he doesn’t seem to understand or enjoy the whole “jump one jump then stop” thing. And while that warmup may have inspired some smarter than I to just hop off the horse while you’re still alive, I told myself on the walk up to the arena that the warmup really meant nothing.

But thank goodness I was right.

The horse was a freaking ROCKSTAR. Listened to every half halt, every move up I asked for…I was grinning ear to ear from jump 1 until we crossed the finish flags. Then he bolted after the finish, but who cares? He was amazing.

Then we jigged and spooked all the way down to XC. I’m pretty sure he was just amping himself up for XC at this point because when we had a few minutes and it was clear we weren’t immediately leaving, he stood still and closed his eyes. Spooking for 10 minutes down a hill is HARD, yo.

Then we were off! He immediately went forward (no sideways shenanigans like at Full Gallop) and over jump 1, then tripped repeatedly galloping up the hill to 2. There was like one stride of level ground before takeoff so I felt like I was hauling his face off trying to get his shoulders up. He jumped it, then immediately took off down the hill to 3, again…tripping and swapping behind. I had enough time to wrestle him down to the trot, so we trotted 3 and I kept him at the trot for 4, then let him go for 5 because of the hill. He tripped his way down to 6 and I thought there was no way we were going to clear it. But he did and then I brought him down to the trot down the steep hill, where he tripped a few MORE times, one time almost falling to his knees. So I called it. Stuck my hand up and told the jump judge I was retiring. Something just wasn’t right.

But P didn’t exactly see it my way. He was jigging around and spotting jumps and trying to take off. So I finally dismounted my flying kite and led the unhappy camper off the course, feeling sad myself. And wondering if I had been imagining things and he was really just fine. But no. Looking back on the helmet cam footage, there were some close calls with the ground. Unfortunately when I edited it to make it IG friendly (under 1 minute), I saved the whole thing, thus deleting the full videos. Sigh.

Honestly though, I’m thrilled with us. No, we didn’t get to finish the course and take home a ribbon, but P jumped everything I pointed him at, including 2 out of 3 of the fences I was most hesitant about. With how he was jumping yesterday, I don’t doubt that he would’ve jumped everything on course. 2nd time at BN ever, first outing in 3 months, and he was awesome. So I call that a win. Now if I had finished the course and P had come up lame, I wouldn’t forgive myself. Better safe than sorry. Always a next time.

And he seems just fine. He got home, had some bute mixed in his dinner and was trotting and cantering around his pasture like normal. He’ll get today off and tomorrow we’ll do some hacking out. Love me some P 🙂