Thanks May As Well Event for more blog content! With mostly flatwork and dressage lessons with zero media happening, it’s been a bit slow on the writing front.

1.My name is actually Kathryn Christine, but I go by KC. My mom and grandma are also named Kathryn, but they go by Katie and Anne, respectively. So my family LIKES the name Kathryn, just not enough to use it.

2. I’ve been obsessed with horses since before I can remember. One of my earliest horsey moments was when I was 3 or 4 and wanted to go on the pony ride at the local fair. I cried the entire time because I wanted to ride the pony off the hot walker, then I cried when it was over because I wanted to keep riding.

3. When I was 3, my dad brought home a flock of baby Canadian geese as pets for us. My mom was NOT amused. My dad taught them how to fly a la Fly Away Home, and even after they grew up and left, 2 (Max & Princess) would always come home every year and stay at the pond next door.

4. My brother is 13 months younger than me and my sister is 10 years younger than me. Now that we’re older, my sister and I are super close. Though I do have to remind her of things like duck lips are NOT a good look and Tide Pods are for doing laundry only.

5. Before I was born, my dad traveled all over the world to hunt after he got home from Vietnam. He was also big into taxidermy and built a huge room off our house for all his war and hunting stuff. It was normal for me to be surrounded by guns, animal skins and various weaponry, so I could never understand why people would be shocked when they came over for the first time. I used to sit on Harry (the lion) to practice my riding position. 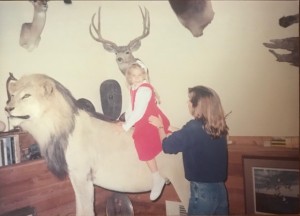 6. On a similar note, my dad took me hunting for the first time when I was 8. We sat in a tree stand for a couple hours until we saw some deer and just as my dad started to get his rifle into place I started screaming, “RUN RUN RUN” at the deer. My dad never took me again.

7. I’m the oldest of 47 cousins and over 200 second cousins- my mom is one of 9 siblings and all but 2 are married with 2-10 kids. Despite loving growing up in a huge family, I’m not a kid person and think my 2 are more than enough.

8. I’m from Chicago, but when I was little we moved around Texas (Lubboc, San Antonio and Dallas) and then to Manassas, VA for my dad’s work. For the year in VA, I lived in a suite at the Marriott and my brother and I OWNED that place. In 2016 we went back there for my cousin’s wedding and I got to see my old suite 108, which was alot smaller than I remembered…

9. I was homeschooled until the 7th grade, when we were enrolled in a Catholic school and it took me a LONG time to catch on that you were supposed to roll up the super long uniform skirts.

10. I used to go around the neighborhood searching for lost dogs so I could walk them around trying to find their owner. My mom eventually caved and got us our own dog.

11. Besides horses, I’ve played volleyball and ran cross-country and track. I was most successful at cross-country as a freshman in high school: MVP, went to state, etc. Then my brother joined the next year and blew me out of the water. It wasn’t so much fun after that.

12. When I was 18, I moved from IL to NC  with my now-ex out to the coast when he joined the Marines.  We split up shortly after moving, and I lived in some pretty sketchy places while going to college and working full-time.

13. I went through a phase where I dated musicians, got a bunch of tattoos (17 of them), pierced my lip and played the guitar. Sadly no pictures exist from that era that I can find. My oldest son Justin just got a guitar for Christmas, so I pulled out my old one for the first time in over 10 years to teach him how to play. My fingers definitely don’t move the way they used to.

14. I met Husband on MySpace right before I graduated college. Yes, MYSPACE. We usually tell people we met through friends, which is technically true. A friend messaged him as a joke, then we got to talking and have been together ever since April 2006. We got married a year later in May 2007. 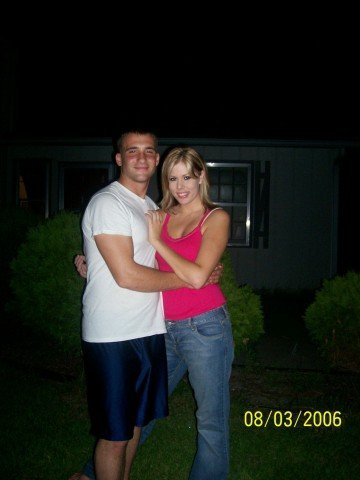 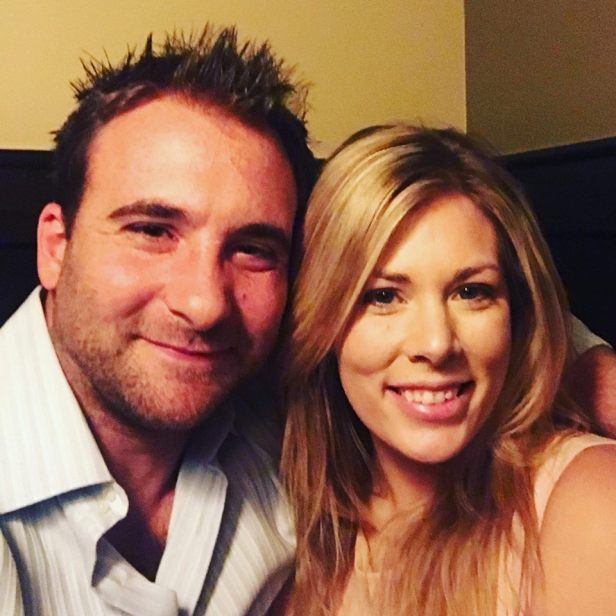 15. I’m the least romantic person in the world whereas my husband is the MOST romantic. One time while Matt was in Iraq, he told me he loved to look at the moon because even though we were far apart, at least we were looking at the same moon. Iraq is 8 hours ahead, so I responded (without thinking) that it was sunny out where I was. So….there’s that. He still hasn’t let me forget about that.

16. I’ve worked in non-profit since 2009 and was the youngest non-profit executive director in the state. My mom has super genes so I’ve always looked younger than I am and I used to hate it. I had to work super hard to get taken seriously. I heard things like, “Oh, I expected someone older” or “I thought you were the receptionist” all the time.

17. I tried for-profit for a very scary year. I worked at a law school and directed a program that helped new attorneys start their own practices. I left after a year because I was tired of the endless meetings with the higher-ups that went nowhere, but I still stay in touch with my “baby lawyers” and they’ve even gotten some traffic tickets tossed out for me.

18. My favorite thing to do is take failing organizations and make them successful. I’ve turned around 2 non-profits and now my current one is doing great so I’m getting a little restless.

19. Our youngest son, Noah, was born with a congenital heart defect and was transferred right away to a hospital 2 hours away to have open heart surgery. I was told I couldn’t leave until I could walk, so somehow (no idea how, to this day) I got out of bed and walked across the room not being able to feel my legs (epidurals are great until you’re in this predicament). Then I didn’t trust my husband to drive because he’s already an awful driver and now he was tired, so I drove us to the hospital in Raleigh. By that time I could feel my legs, though. They talked about me in the hospital, which was really embarrassing at the time, but now it’s a pretty funny story.

20. We have 2 dogs, both foster fails, a German Shepherd named Kaiser and a Shepherd/Lab mix named Adele. We’ve had Kaiser for just about 10 years and Adele for 1.5. Kaiser and our oldest son, Justin, grew up together and Kaiser is hands down the best babysitter in the world. Husband doesn’t want to foster anymore. No idea why.

21. We have a cat named Zoey, who was a rescue as well. We got her when she was about 6 years old, back in 2011. On day 1 she ran away and we thought we lost her forever. Then we found her in one of our kitchen cabinets the next day- turns out she’s mute which the rescue hadn’t told us. So she has to wear a bell on her collar so we can hear her if she gets stuck somewhere.

22. At Husband’s insistence, we bought a pistol a few years ago. I took some shooting courses, but my interest quickly waned. Then a few months ago while Husband was out of town for work, I woke up in the middle of the night to Adele barking like crazy (she never does that) and all of our outdoor sensor lights blazing. So I sat in my bedroom doorway (where I could see if anyone was coming up the stairs) for over an hour with the gun in my hand and Husband on the phone. Now I’m getting my concealed carry because I never want to feel like that again.

23. Husband is the better parent. I have NO IDEA what I’m doing. When I leave overnight or for a weekend, I don’t think twice. If he’s the one leaving, I’m super nervous. Not to mention he’s the cook of the family so if the kids want anything other than cereal if it’s just me, McDonalds it is!

24. I don’t really watch TV and it’s hard for me to sit still through an entire movie. I watch shows like The Office, Will & Grace, Friends and most short sitcoms like those.

25. I listen to rock/punk like Five Finger Death Punch, Social Distortion, Rancid, Three Days Grace, Linkin Park, etc. I hardly ever listen to the radio so I never know current songs unless I already like the band.

26. I used to want to be Belle from Beauty and the Beast and have a library with a ladder so I could swing down it like she did in the movie. So when we didn’t know what to do with the formal living room in our current house, I made Husband turn it into a library. If I’m home, I can usually be found in there with a book and the fireplace going. Husband still has to get a ladder for the bookcases though.

27. When we moved from Jacksonville to Concord, I joined a crossfit gym because I was bored with the same old cardio gym classes, but I didn’t want to do any weightlifting because I thought I would get bulky. Now olympic lifting is my favorite thing ever. All my friends are either horse friends or crossfit friends and both sides think the opposite sport is crazy.

28. Along with crossfit, I started doing Spartan races in 2015 with members of my crossfit box. Even though I no longer enjoy running the way I did when I was younger, I always have a blast doing these with friends.

29. I love tailgating and going to football games, but have no clue what’s going on so I just yell random things and hope I blend in. 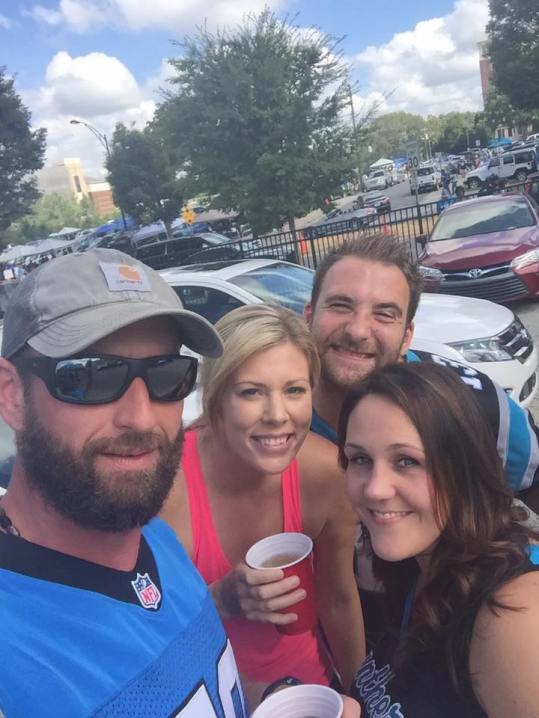 30. My favorite feeling in the world, even better than crossing the finish flags on XC, is the feeling at military homecomings. I almost wish Matt would deploy again so we could have another one. Almost.