Today was supposed to be 75 and sunny. I’m so tired of the doom and gloom that have been omnipresent the last several weeks.

In riding news, I stole another exercise from Lainey Ashker and spent Sunday setting up the circle part of it and a couple other exercises, like the always-fun one stride. 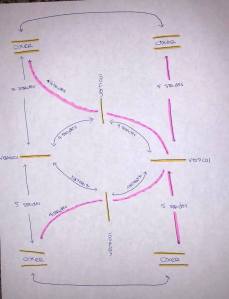 Unfortunately the arena didn’t have room for the oxers on both long sides, but I figured the circle would be challenging enough as it is. Check out her YouTube videos here where she goes through it on a green horse and then coaches students through it. I watched the whole hour, it was fascinating.

I was in a time crunch Monday, so I hopped on just to test it out and I think I have to bring 2 of the jumps in a bit since the striding was a little off, but P was game anyway. Even though I started off on the right lead, which for both of us is our worse way. Reminder: start off on the easier side. Duh.

And then it was exponentially easier when we went to the left.

This exercise caught my eye because I have a wonderful tendency to lean and motorcycle through turns, while dragging P’s nose around with the inside rein. So this was super hard for me because if you do those things, you won’t turn in time. In the few short times I ran through this, I told myself to turn my shoulders slightly to the inside without leaning. You can sort of see where I actually did that and where I didn’t. P wasn’t sure what to make of the tiny jumps (I almost put them as ground poles to start but was too lazy to adjust anything), so I think bumping them up a couple holes will help him. He also memorizes patterns so once I do it a couple times and he knows where he’s going, I’ll be able to work more on my own self.

Tuesday he had off, and yesterday was the most blahiest of blah rides in the history of blah. I had every intention of riding through a couple dressage tests, then someone else was in the dressage arena so I went to the jump arena and just plodded around until I’d had enough and we went for a hack around the farm. Which wasn’t a great idea because the ground is still so mushy and I can’t have P lose a shoe right now. We have a big weekend ahead of us.

Remember when I said, “Now that Trainer B is gone, that frees up all the time to get back into consistent work with Trainer J?”

Yeah. Didn’t happen. At all. The last time I saw Trainer J was….November? She was scheduled to come to the barn for lessons a few times but each time was cancelled because of weather or sick kids (hers). And work has been a bit nuts wrapping up end-of-year stuff, grant reports/proposals being due (I’m in non-profit…all about the grants) so I haven’t been able to haul up there. Which means I’ll probably die tomorrow.

And then this weekend, we’re going on an adventure. Hopefully. Saturday it looks so icky it might only be a Sunday adventure, but fingers crossed that no one wimps out.