Before I forget, I have to confess something. Thanks to everyone who left a nice comment on yesterday’s post! There were 2 in particular that made me go, “Whaaaaattt?”

Thanks Amanda and Olivia: 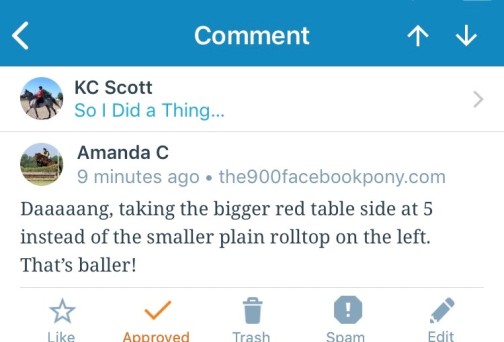 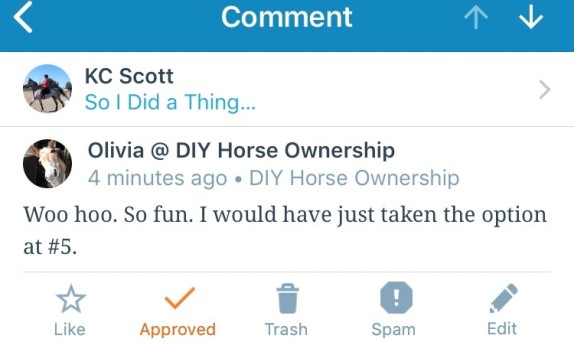 What option? You guys are seeing things. Then I went back and looked at the video….and yeah. In my drowning despair when I found jump 5 (and also being rushed to get back and tack up for SJ), I failed to look at where the white flag was. And…..you will see that the TINY PLAIN NOT SCARY TABLE is, in fact, between the flags. 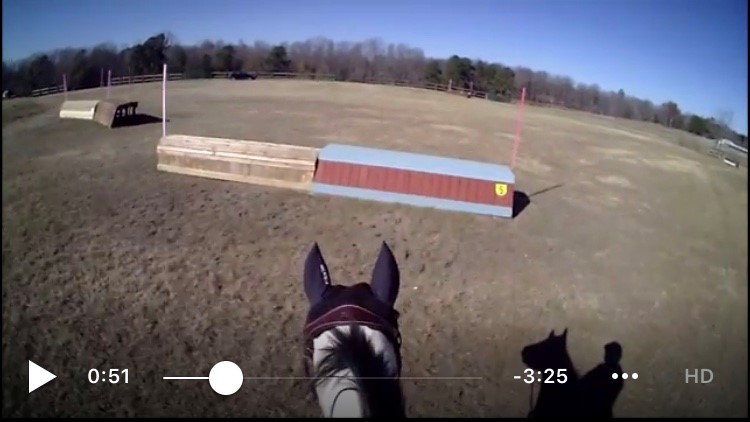 When I ran to go find jump 5 between dressage and SJ (it wasn’t numbered the night before), I saw the number, noted the never ending width, and booked it back to the barn to get ready. And this, kids, is another example of what NOT to do.

I’m actually glad it happened like that, though. If it had been numbered the evening before during my course walk, or if I’d been in less of a rush, I would’ve resolved to take the smaller option for the same reason I chose the option at 8, the down bank: we needed a good experience. But I guess it’s true that what you don’t know won’t hurt you because we successfully made it over the “giant” one.

But seriously. Rookie mistake much?

Next time I have to walk a course alone, maybe someone should FaceTime with me to make sure I’m doing it right….

Anyway, this weekend was a whirlwind. Between entering on Friday afternoon, hauling to Aiken the next day and showing the next, I didn’t really give myself time to panic or think about how I was trying YET AGAIN to move up after so many failed attempts.

Sidenote: Can you really call it moving up if you’re talking about the lowest level of recognized eventing? For the sake of simplicity, I’m going to.

But really. BN is 2’7″. It’s not large by any stretch of the imagination and even that damn jump #5 was really just a blip in the grand scheme of things. Pilgrim could probably hop over any of them from a standstill. BN is where most people start their horses.

But it’s not where I started. I started with zero confidence, thinking a stick on the ground was too daunting. It was nothing like I remembered from riding as a teenager and I honestly have no idea why I didn’t quit and move on to something else.

And when I think, “Holy crap, it took us (me) THREE YEARS to compete at BN,” I cringe. But really, even though we’ve done eventer-ish stuff for 3 years, P doesn’t have a lot of actual eventing experience.

We did 2 horse trials in 2015, both at the 2′ division. In our first one we were eliminated because he wouldn’t go anywhere near the water (we had to go past it, not in it, to get to our jump) and we were holding people up at the start box.

In 2016, we competed in 3 horse trials, and of those, completed 2. In one of them I eliminated us by leg yielding him out of the arena in dressage. The other 2 were still at the starter level and both had refusals in SJ and/or XC. Not exactly a sign to increase difficulty.

This year we competed in 5 horse trials, and completed 4. That’s more this year than the other 2 years combined. So more exposure this year than ever before. Not just in horse trials, but in jumper shows as well, which is really what I needed to get me so out of my head. The other key: we switched to a good, stable trainer who, like a ninja, gradually increased the difficulty of our exercises to build our confidence without an agenda or timeline.

P’s never been the simplest horse to ride. Don’t get me wrong, he’s not nuts or uncontrollable (usually), but he’s so very sensitive and requires a lot of tact that I, quite frankly, am still trying to obtain. And being young, his needs are ever-changing. When he was younger and would lose his brain, that was it for the day. He’d shut down with added pressure. Now he requires more pressure to tell him to get over himself. Couple that with a short walk break, and he’ll typically get back to work. But he trained me early on to back off of him, so now that his needs are changing, it’s up to me to step up and forget our baggage.

So yeah, first BN might not seem like a big deal to most, and the fact that it took 3 years to do so is not exactly something I enjoy advertising to the world (hence why I don’t publicize this blog anywhere…), but I’m so proud of us for finally making the leap! It really felt like I would be stuck at starter forever.

Now it’s time to fix whatever the hell has been going on with dressage lately. Thankfully Trainer J is coming to my barn for lessons today. Because that’s now become the weakest phase.