Last Saturday, P and I went back to the site of our very first HT together in 2015. P had never seen an XC course at that point and despite leading the field after dressage and SJ (all 2’3″ of it), he was so freaked out by the water complex, I couldn’t get him past it to jump 4 and we were eliminated.

I had originally entered in the BN division because P has shown repeatedly that 2’6″ is not an issue for him (duh), but after the lesson at Trainer B’s the day before, I emailed the secretary and begged her to put me in the lower division, aka the same division as 2 years ago.

Sigh. But confidence building was the most important thing, I suppose. I’m still trying to remember that I’ve only had him back since April and not to focus on past that.

Since Child #1 had football practice, I was going alone, but meeting up with someone I had met at one of our jumper show forays- hooray for eventer friends! Since I went in the lower division, my ride times were perfect: 11:18 for dressage, then 12:30 for SJ and XC right after that.

I pulled in, unloaded P, and prepared for the day. For some reason I was super nervous and pretty much alternated between pacing around my trailer and chugging water (tip: don’t drink 4 bottles of water if you’re already nervous). Meanwhile, here’s P:

At 10:45 I got on to meander over to warmup and after a few minutes of just stretching our legs, I asked for the trot. It was…meh, he was behind my leg and felt a little stuck, so I asked for the canter to get his energy up.

Ask and you shall receive, right? Well, not this time.

It was a little, uh, startling.

I mean, this is P, the actual Energizer Bunny. When I was packing for the show, I glanced at my spurs in my trunk and thought, “Nah.”

Thankfully, another competitor noticed my struggles and offered her dressage whip. Which at first I was all, “No thanks. I enjoy not being dead.” But after some more struggling, I went back over and said, “So about that whip…”

I think I’ve used a crop with P maybe 2x in the entirety of our time together. Neither with satisfactory results, and while his reaction to there being a whip on board wasn’t nearly as dramatic as I’d initially anticipated, he was still a bit hollow and strung out. BUT. He cantered. So there’s that.

Then it was time for us to go. I still had the dressage whip (wasn’t letting that sucker go), and in we went. I actually remembered to halt at X this time, and we proceeded. And it was bad.

The whole thing just sucked. Like, P was listening-ish, but there was no softness, no bend, no moment that I felt was good. He was still a bit freaked out by the whip, and was eyeing it most of the time, and leaping into doing whatever I asked.

AND we got a freaking 5.5 for geometry. I mean, totally deserved, but ouch.

We had a nice hour break, where P devoured more hay- even when his neighbor broke loose and tore around the show grounds. 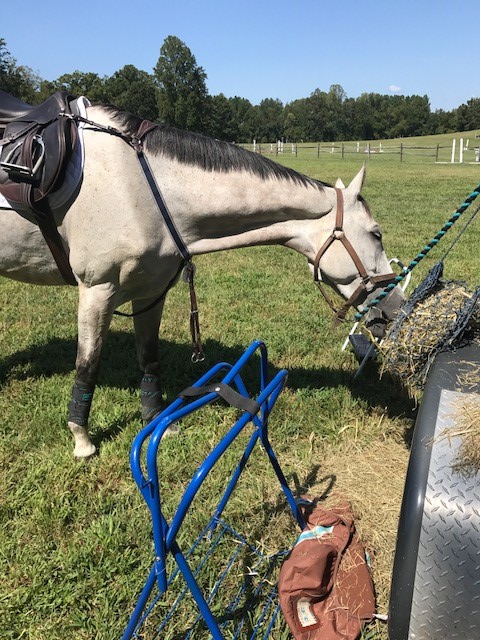 Finally I got on him and headed to warmup. I jumped him over the vertical and the oxer exactly 2 times each, and then we went to get in line.

P was good for SJ. Not brilliant, but not bad at all. The jumps were tiny, there was only 7 of them, and besides a couple of rollback, nothing was technically challenging. He jumped them all, we were done in maybe 35 seconds, then finally on to the fun part!

By now I felt a bit bad- P was just so…tired. And that’s my fault. We did a lot of jumping the day before, not to mention he was in the trailer overall for a few hours as well. I honestly didn’t think with how small everything was that it would be an issue, but lesson learned, I suppose.

We got to the start box, P walked in and we turned around, but had a few minutes to wait. And he just stood there, not moving a muscle. Not that he’s ever acted up in the start box, but he was like a statue, a very tired statue.

And then we were off! At first P seemed just really unsure of what we were doing, but quickly got his head in the game. And for that, I am thankful. 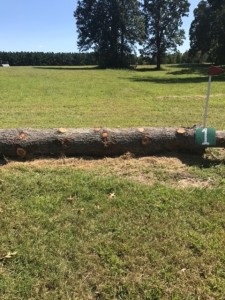 Jump 2 were the tiniest coops you’d ever seen. Seriously. P didn’t even know what to do at these. 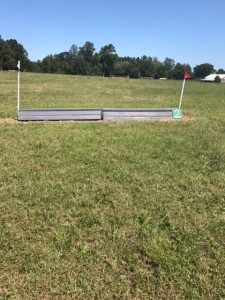 Then down the hill, past the water complex and to jump 4. This is where it got exciting.

I felt like P was going to go. After all, he’d just jumped 2 logs successfully, and this one was no different. But another horse/rider had just jumped from the back field into the one we’d just left and P got distracted. So I ended up, oh, ya know, on his head.

I’ve seen the videos of riders who get in those predicaments and try with all their might to not fall and get eliminated. I’ve always said I’d just fall. But even though my hands were on his poll and my feet on his chest, there was NO WAY I was getting eliminated at the same jump 2 years later.

So I slid back down, lifted myself up and over the pommel of my saddle, reined back and we resumed our normal programming. Sadly, besides my helmet cam there’s no other photographic evidence of it, but there ARE witnesses. Many high-fives were exchanged afterwards.

So then it was up a “bank” and then down the “bank” and into the woods. 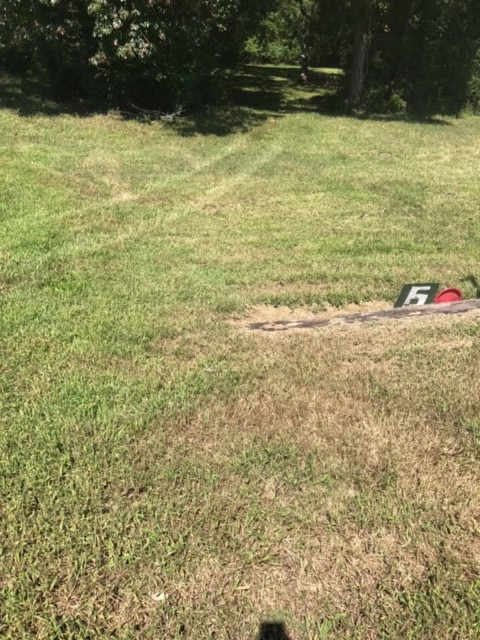 And I was pretty sure P would stop at jump 7, but he sailed over, much to my delight. 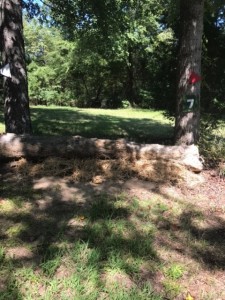 8 was another tiny lil thang. 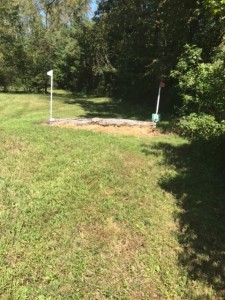 9 was the ditch and P wasn’t so sure about it, but went over anyway.

Then down a pretty steep hill to 10, which was as tiny as the coops. Funny story, I was actually going to see if I could run HC and opt for some of the BN jumps, then I decided with how tired he felt, that wouldn’t be best. But this jump made me wish I had asked.

Then it was back up the steep hill and a left turn to a hay feeder thing. P got a little backed off, but didn’t stop.

Jump 12 was a log into the field where we started/finished.

Then it was through the finish flags with a huge grin on my face.

Since it’s such a small event, you run XC “on your honor,” and unfortunately our stop dropped us from 2nd (since the judge was tough on everyone) to tie for 6th. BUT since we had no time penalties, and the other 6th placer had 21 time penalties, we got the ribbon. Don’t judge me for the fact that I was ecstatic about that.

All in all, I had a great time and was thrilled with P. Stuff to work on (as always), and while it may have been a little bit humbling to be at the same level as 2 years ago, I had FUN. And that’s what it’s all about.

One thing that has definitely held us back is our lack of practicing things between lessons/shows. It’s become ever so clear that something’s gotta give, so fingers crossed, an exciting change is in the very near future for us.

And again, don’t forget to sign up for the Coat Defense Giveaway!