One thing that’s always (pleasantly) surprised me about P is his lack of contracting skin funk. We live in the Charlotte, NC area and it gets so insanely hot and humid, it’s a constant sweatfest. Add in the fact that P can’t go a day without rolling in the mud, and it’s surprising he has any hair left.

Besides a quick bout with scratches on one foot last year, P has remained fungus free. So when P’s ears started looking funky, probably due to sweating in his fly bonnets, I dug through my limited skin care supplies to try to clear it up. Unfortunately, all I had was a medicated shampoo and while P is fine with me clipping that area, he’s apparently not so much a fan of me washing shampoo off of his ears. 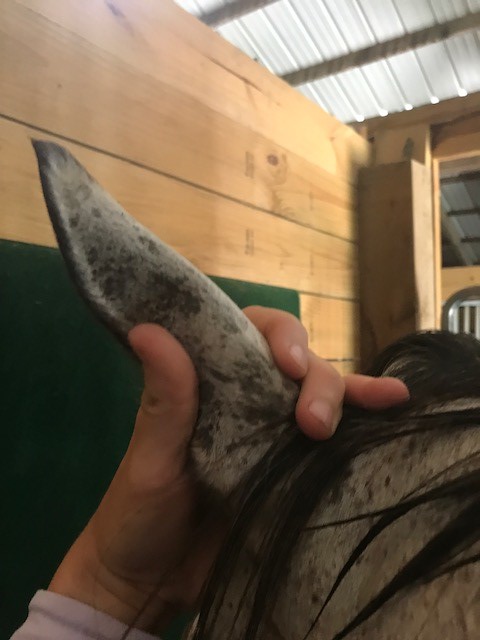 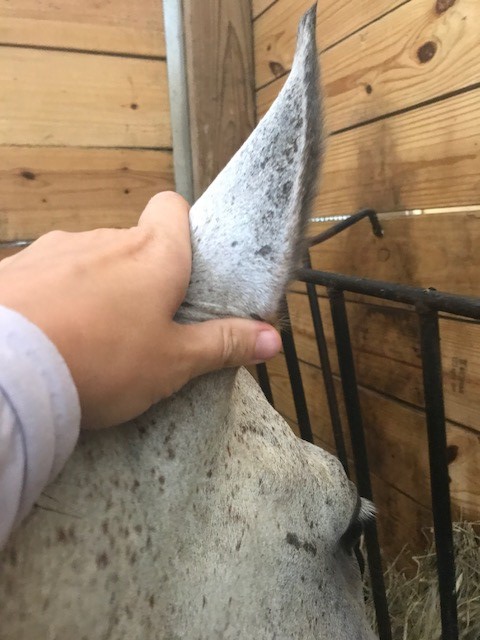 At the same time I had been trying to treat P’s ears with medicated shampoo (don’t be like me, just don’t) P came in from the pasture with a mark on his hindquarters that looked like a scrape. NBD, and I didn’t give a second thought to it. But then maybe 2 days later, there were a bunch of little marks in the same area. It was…weird. The Barn Trainer (BT) said she had noticed it when she was turning him out, but had no idea what it was either. 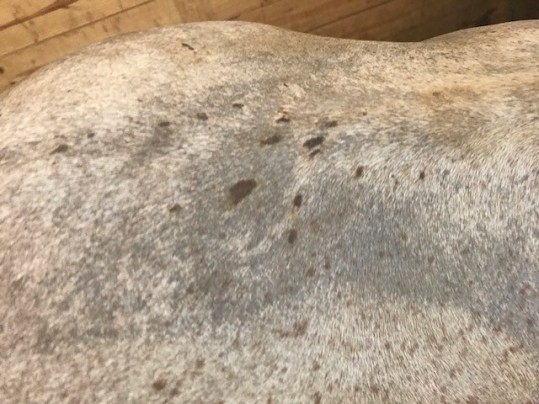 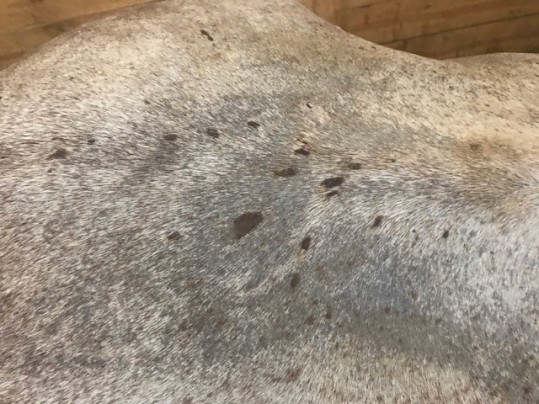 So after trying the shampoo for a couple days and seeing no results, and P becoming increasingly agitated with me, I looked around for something else. 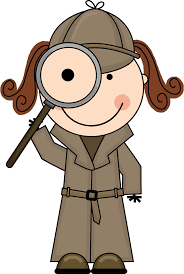 When I was at Rolex this past year, I was in the Top Rail tack booth and a rep was talking to me about the products. At that time I had no need (or room in my suitcase!) but I took their cards to add to my collection and went on my way. Then I saw another boarder using their powder on her horse, so I asked if she liked it. She said yes, so I went on their website and ordered both products: their Powder & Dry Shampoo and the Trouble Spot Drying Paste.

I ordered it Tuesday, August 22nd; they shipped it that day and my package arrived Thursday afternoon. They must have revamped their packaging because what I unwrapped looked way different than what the other boarder has.

And a sweet handwritten note on my invoice. With free samples!

I ordered the Pro size because, to be honest, having descriptions like “24 oz” mean nothing to me. Let me tell you, these suckers are BIG. Both will last a super long time.

They also included some cards for the different ways to use the products. 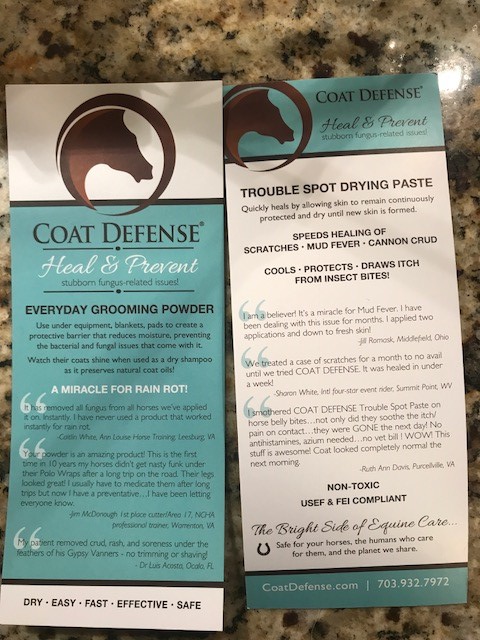 That Friday (August 25th) I went out to go slather the stuff on my pony. I used the paste on all the now-hairless areas on P’s hindquarters and on both his ears. 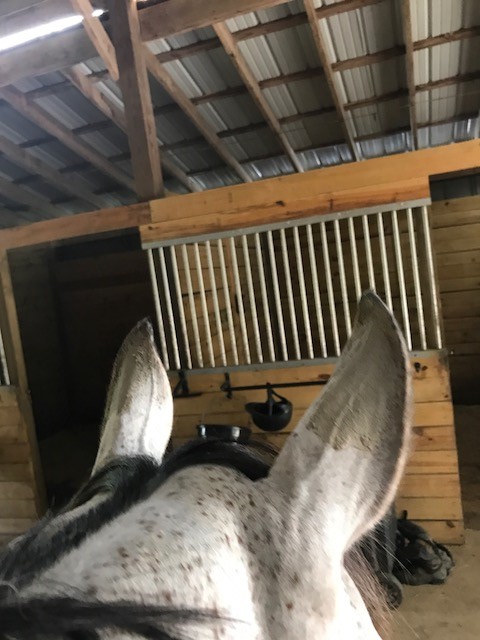 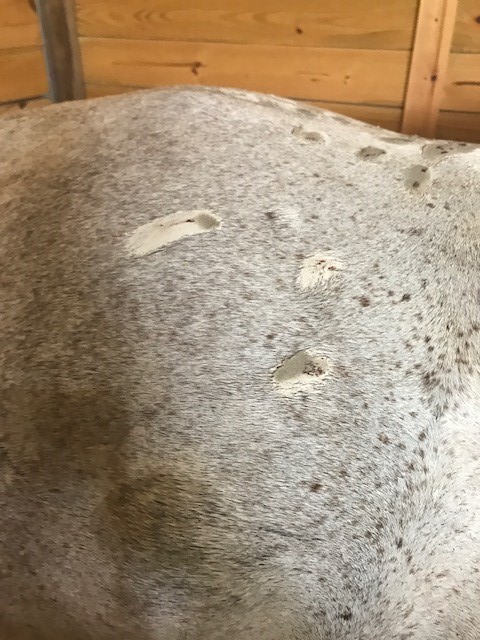 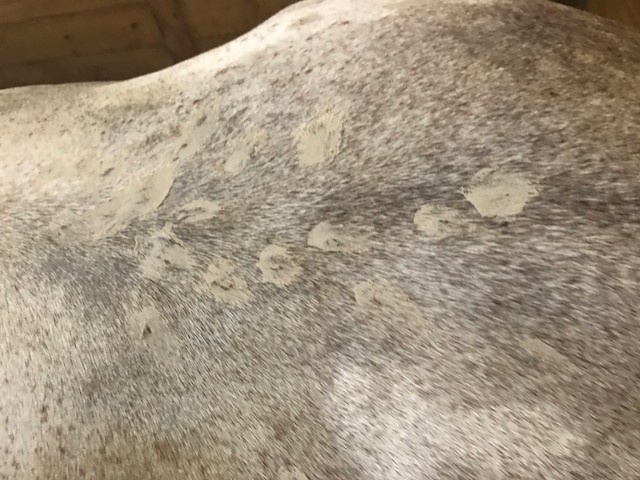 I liked the consistency (and it smells fantastic!) and how easily it went on. When it dried it turned white, and I was happy to see it dried pretty quickly. I turned P out and walked away, then turned around before getting in my truck and watched helplessly as he rolled, sure that he was going to rub it right off.

But the next afternoon when I got to the barn, I was surprised to see that everything was still covered, which was nothing short of a miracle. I wasn’t sure if I needed to wash it off and reapply, or if I could just add a coat, so I sent a message off to Coat Defense via their Facebook page and got a response within half an hour…on a Saturday. 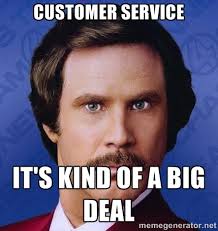 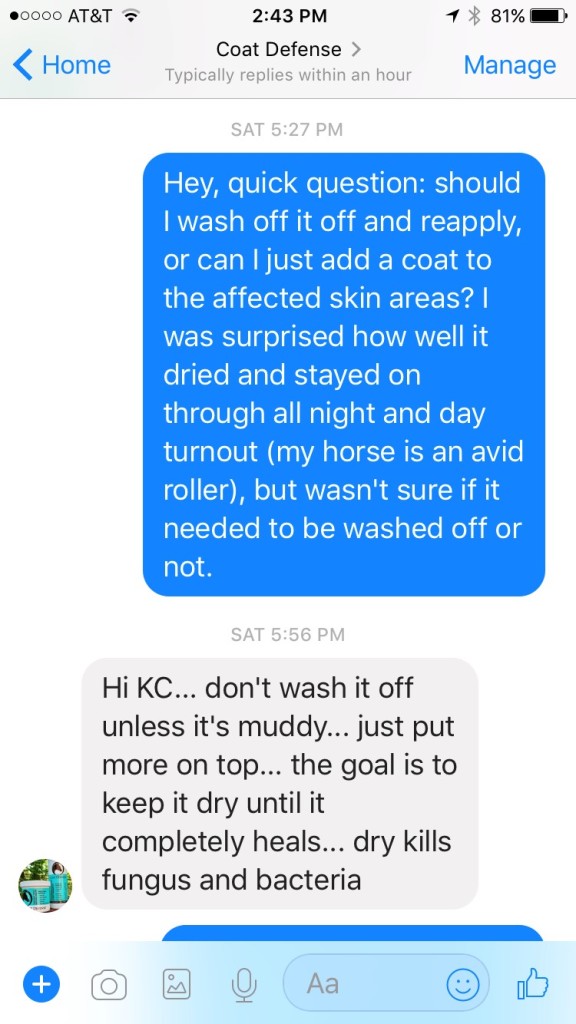 So I added some more just to be on the safe side, waited a few minutes for it to dry again, then let him loose again. Rinse and repeat until Wednesday (August 30th), when I finally washed it off. 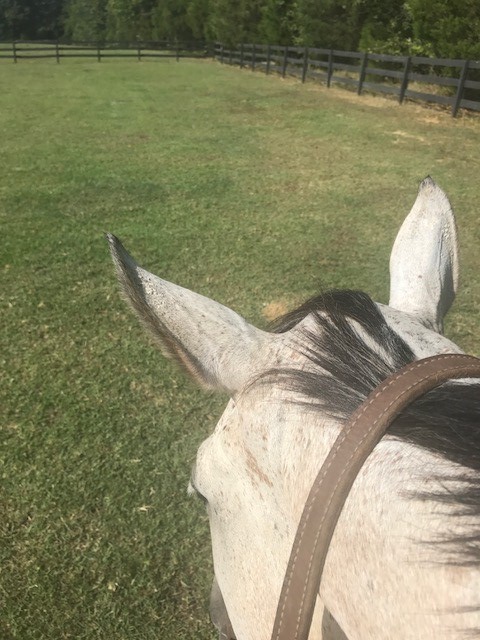 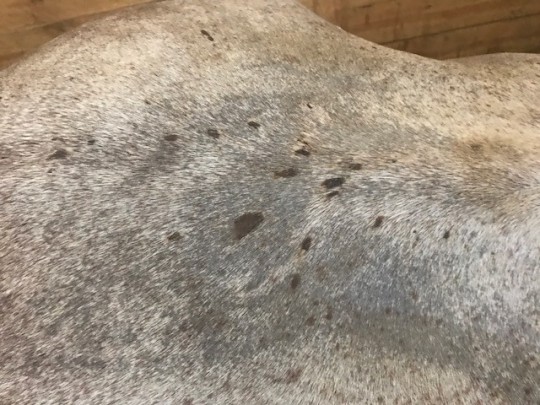 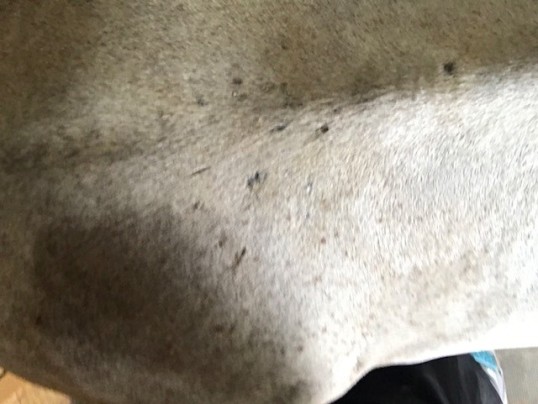 The fungus on his ears is completely gone, and the areas on his hindquarters were just about cleared up. There’s no raw skin, the hair was growing back over it and no more spots have popped up since.

I had also ordered the Powder & Dry Shampoo, but then kind of didn’t know what to do with it. P doesn’t have any rain rot or anything else besides those spots that the paste took care of that would need this, and he doesn’t chafe or have rubs from his boots or saddle pads or anything. 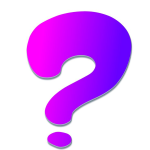 Then on Tuesday I pulled P out of his stall and stuck him on the trailer to go to Trainer B’s, thinking he was clean (the barn is a little dark). I usually tack P up in the crossties outside under Trainer B’s barn’s overhang and when I stood back to look at him, I saw a bright yellow pony.

But I had the Coat Defense stuff with me and that’s when it clicked that the bottle said dry shampoo also. Durrrr.

So I put some on my medium brush and swept it over the yellow spots. It looks and feels like baby powder, but smells MUCH better, and it immediately took away the worst of the yellow spots when I went over it with a rag. Slightly majikal, and he looked a bit more presentable to the world.

I didn’t get any pictures from that day, but luckily my pony is constantly gross, so here are some from Sunday. I only used it on the saddle area. This is after brushing it with my regular medium brush. 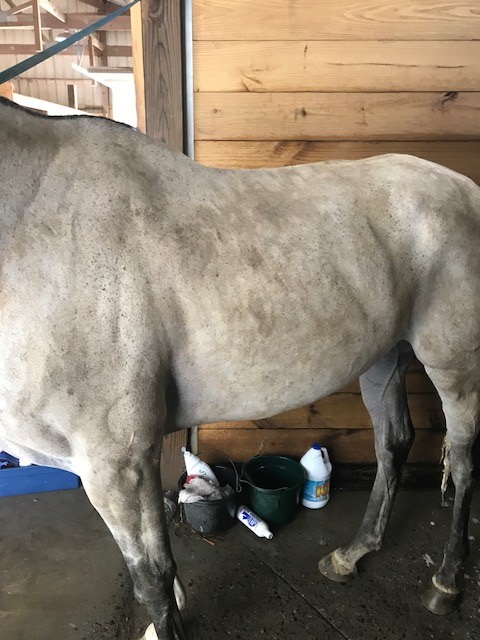 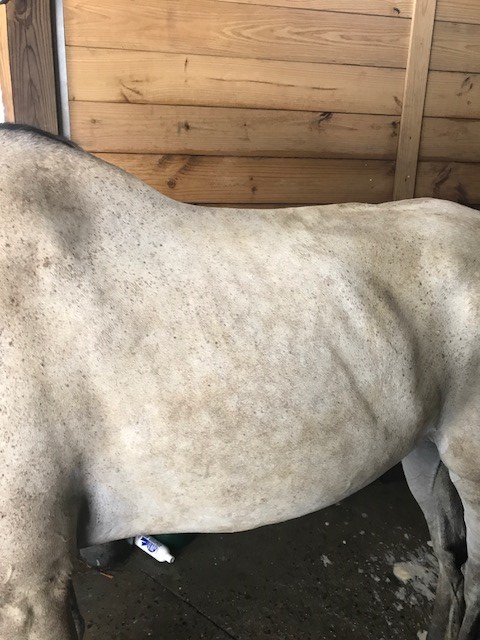 Honestly, I probably won’t use it as a dry shampoo very often. My horse is so gross that I’d fly through bottles upon bottles if that were the case. I can see it being useful if your horse wears fly gear in the summer and you’re concerned about him sweating underneath. I’ll definitely use it in the winter when he gets clipped and blanketed.

I did try it as a helmet deodorizer, because that thing is so gross that even my husband won’t touch it now. I have a Charles Owen AYR8 that does NOT have removable liner (never again), and after this summer, the CO helmet deodorizer spray doesn’t put a damper on the grossness anymore. This totally worked after a couple applications of shaking some onto a rag and grinding it into my helmet liner.

So….all in all, I’m a big fan of this stuff. I’m glad I got the big versions because I can see it lasting a really long time-unless I keep finding new uses for it, of course. It smells great, totally works, the packaging is gorgeous (obviously important), and the customer service is phenomenal. I’m a fan of supporting small businesses when possible, and this ticks all the boxes. 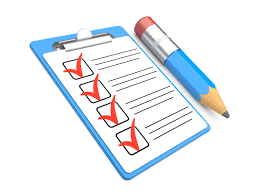 So, with that said, I’m doing a giveaway for the free samples they included in my order!  They’re smaller versions of both the Trouble Spot Paste and the Powder & Dry Shampoo. I’ll pay for shipping 🙂

To enter, just comment below or email me at kcscott85@yahoo.com. I’ll put each name into a random generator and choose one from there.