Friday we headed to Trainer B’s for a lesson, where he wanted to get into some of the more technical aspects of SJ, particularly roll backs. Now P and I can do roll backs, but with our newly acquired adjustable canter, specifically being able to not just wing it, but really control pace around the turns and to the jumps. I’m actually incredibly proud of the work I put into the canter in the last few weeks. P is now CRAZY adjustable on a consistent basis. Like I have 6 different canters. Trainer B says I need 8, but nothing is ever good enough for Trainer B. And that’s ok with me. In the meantime, #winning.

P was in kind of a mood when I was warming up, so we started by warming up over a gate that P has jumped only 6 dozen times or so. And on attempt 3, slammed to a stop.

We just went back and forth until that mess was out of his system, then added in a turn to an oxer-ish thing. And P wanted nothing to do with that.

Now, one thing that I can see from the video is Trainer B is telling me to tap P, and my legs are just clamped. I never noticed that before, but I’d bet anything that I do that all the time. So something to think about.

Once we did that a few times, we added in a vertical after the oxer, then back to the oxer the other way. It was a crazy sharp turn and I failed more times than I can count. But thanks to husband videoing, it looks like I actually only failed 3x.

This first one I took a slightly too long spot to the vertical, so by the time he landed and I could get him back, it was too late.

So Trainer B’s words of wisdom were to stay patient and wait for the fence. 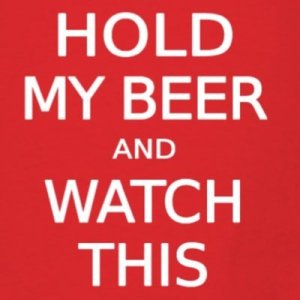 Maybe Trainer B is actually underpaid.

Then the 3rd attempt, I got in perfectly, but waited too long after landing to actually make a move. Maybe I was just so surprised that I got a good distance to the vertical. Who knows.

Yes, Trainer B. So close, but yet still so far away.

So the next go-round I was determined to do it, even if I jumped off P and did it myself. Luckily my horse cooperated and we did it together, but then I botched the final oxer. Can’t do anything perfectly the first time. It’d take the fun out of things.

So Trainer B asked if I wanted another go-round, which I did, so off we went. And this was jump 1… 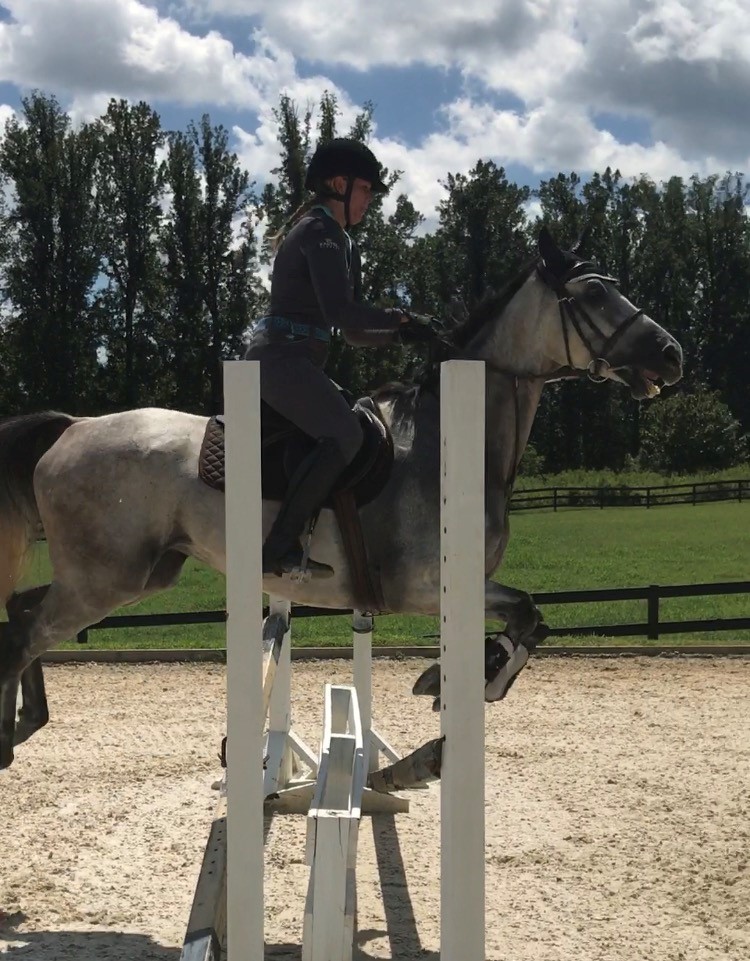 I knew it was ugly, but when I saw this it just made me laugh. Because it immediately reminded me of this clip from the Stephen Colbert show. 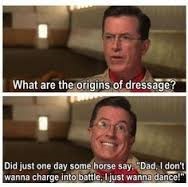 Needless to say, though, we started over.

The next day, Saturday, was jumper show #2 in 2 weeks.

I’m adding this in to this post because there’s zero media so it doesn’t even deserve its own post. Husband had the kids at a pool party and I totally forgot my Cambox. So…words will have to suffice. Or skip this part because ugh, so much reading.

If you recall, I’ve never been to a show with a trainer (as an adult). So this was exciting for me. He was taking another client as well, and wanted her to start at 2′. I wanted to start at 2’3″ so we decided to meet at the showgrounds at 2 PM.

I did some w/t to loosen him up, then we stopped by the arena so I could watch the rounds and learn the course. All of a sudden, P’s head whips to the left, but I ignored him because I don’t give in to spooks like that, yo. Turns out it was Trainer B walking towards us, which blew P’s mind. For as much as he loves Trainer J, Trainer B makes him work super hard (though so does Trainer J so maybe P is just sexist), and it was like he couldn’t understand what Trainer B was doing here of all things.

So we got all warmed up, doing our crazy adjustable canter (still can’t believe all that work paid off so quickly) and jumping the itsy bitsy warmup jumps. I had missed the 2’3″ classes because there was ONE person in one of the 2’3″ classes so it ended even before I had P bridled. So it was 2’6″ or bust.

Now, I know 2’6″ is small. I look at it at home and at Trainer B’s and think, “meh, tiny.” But seeing all those crazy colored poles, fillers, oxers, combinations and weird distances just made it look kind of intimidating. Especially on a horse that, you know, stops. 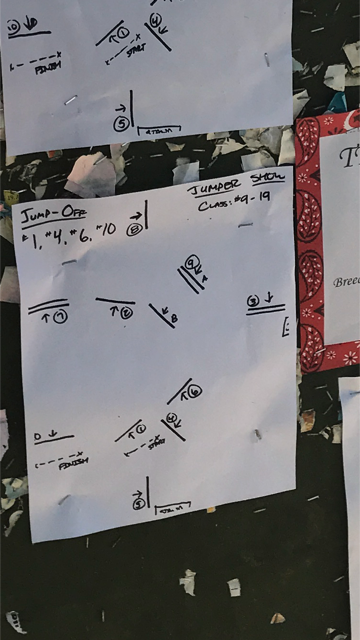 So Trainer B said to get in the arena and gallop. Gallop, then forward canter, then collect, then go forward, etc, and come aggressively to the first jump. And P felt awwwwesome.

Jumps 1 and 2 went fine, but I let him drift right upon landing from jump 2, and we cut the turn to 3 a bit too tight, so he stopped at it, a very bright pink and orange oxer. We reined back, he hopped over it, 4 was fine, then a tiiiight rollback to 5, but since we practiced that the day before it was all good. 6 was an American flag verticle with the weirdest distance to 7 (an oxer) I’d ever seen. Like, you needed to land off 6 and immediately go left, then go right, then somehow try to go straight. Anyway, we stopped again, reined back, and popped over. 8 was fine, then 9AB was a one stride, with an oxer to a verticle. Another stop at 9A, the oxer (see a theme?), and reining back didn’t work. I actually almost just quit there, but then it occurred to me that P may not have enough momentum from just reining back, so I circled and picked up a forward trot, and he went just fine over both A and B. 10 was good and we were finally done.

Now, the only consolation I had, and it’s terrible, is that most of the horses that I watched had multiple stops. Maybe that had something to do with our round- maybe mentally I told myself that if other horses are stopping, then of course mine is going to. I don’t know. But I do know we haven’t schooled oxers in awhile and that’s obviously overdue for one or both of us.

We talked about the round, what went well, obviously what went wrong, and headed back in. This time, the only stop we had was at 7 and it was totally my fault. I felt us losing some power coming off of 5 to 6, and turned to get the line to 7 waaaay too late. If I’d ridden correctly, I’d bet anything he would’ve jumped it.

So, again, glad that the second time was better than the first, but  also still frustrated because at a HT, you get one shot. And honestly at this point, I’m not sure what the problem is. He’s ulcer free, his saddle fits, he’s not lame, he gets chiro’d and magnawaved. So pain? Unlikely. Habit? Maybe. I know I was wrong in how long I waited to find the ulcers, so maybe he’s still expecting jumping to hurt? Confidence? Again, maybe. Confidence on my part? Also maybe. I’m a believer in mental toughness and that visualization is a powerful tool. But as much as I tell myself to ride him like he’s not going to stop, it’s always in the back of my mind. Because what other experience do I have to go on? Does he not want to jump? Anything is possible, but I don’t think that’s it. I suppose all this is a post for another day when I’m a bit more clear-headed about it, so let’s pause there.

Sunday, P got back on the trailer (which honestly surprised me) so we could trail ride with friends. I’m sure P was relieved to unload and not see an arena or jump course in sight. 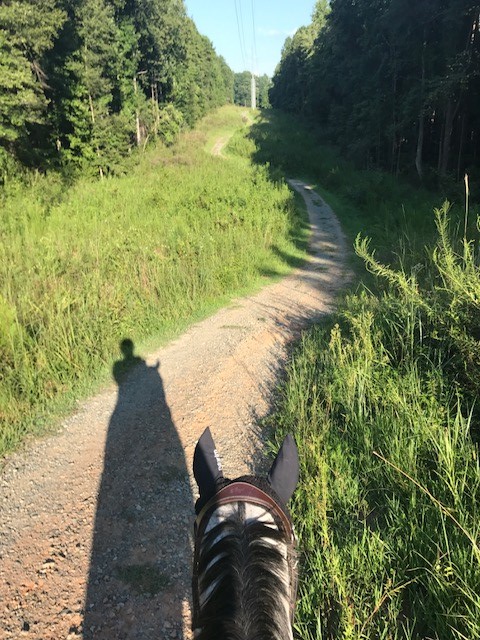 Today I went out to the barn before the whole eclipse thing happened and we popped over a few fences. It’s so nice to not be run off with after jumps now! 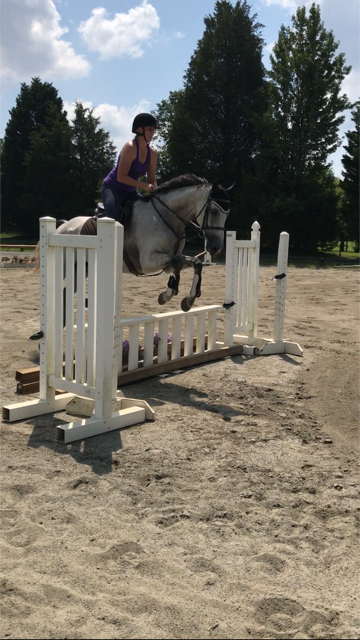 P will get tomorrow off because I have to take Husband to the airport after work 😦 then we’ll get ready for ANOTHER jumper show on Saturday. I’m hoping to squeak in a lesson with Trainer J this week.

Happy Monday! Is it, though?

11 thoughts on “How Many Jumper Shows Can We Go To?”