Soon I will be media rich because 1) Husband comes home Wednesday morning, and 2) Cambox is coming back to me! After a quick jaunt to France, it’s fixed and coming back across the pond.

Last Thursday I hauled over to Trainer B’s for a lesson. While I’ve been working on getting more consistent adjustability with P, it had been hit or miss and there were a couple days I was so frustrated because I literally felt like I was just hanging on his mouth and not getting anywhere.

One thing I have changed and it seems to have been for the better, has been our warmup. Before, I was just kind of going through the paces, not asking for much, just bopping along to warm up his muscles. After seeing Trainer B ride him, I’ve started putting him right into work. Lots of transitions, getting him in front of my leg from the get-go, lots of halting, some rein-back, and adding in lateral work. And P has done well…except in the canter.

Though you definitely can’t tell from the above picture, P actually has a really lovely canter. But he’s also fairly lazy (hot horse/lazy horse…meet 2 of P’s personalities), and while his canter always STARTS nice, he tends to get strung out as we go along: falling on his forehand and making it hard to steer or package. So for the past however long, going around a course hasn’t necessarily been fun because it’s been “half-halt and pray.”

Half-halt and pray doesn’t always work out, though. I think we can all agree that a quality canter is necessary for any sort of jumping, and probably most of our issues stem from me not demanding that type of canter. P’s so sensitive that I would just take what I could get and try not to pick at him. Well, that’s obviously not been working.

After warming up at Trainer B’s, he asked to see the canter adjustability. I was all, “yeah, this is going to be great,” because P was awesome warming up in the walk and trot. Naaaah. P immediately started racing around the arena, ignoring lil’ ol’ me up there. I complained that he was completely ignoring me and I felt like I was just hanging on his mouth- even softening then asking again was getting me nowhere. So Trainer B said, “Turn up the volume and see what happens.”

Apparently I’m too nice to my horse. I suppose it’s typical for a one-horse AA such as myself, but P is completely busting through my aids as if I’m not even there. So Trainer B said not to even ask nicely the next time- lean back to where it’s not pretty anymore, and pull until I feel him about to break to trot, then soften and send him forward again.

And…P responded. Not right away, but eventually it got to where I was just starting to sit back and without even doing anything with the reins, he would slow. So we played around with that- collect the canter, go forward in the canter, until P was responding off of a light touch. While it will still take some more practice to get that solidified, at least I’m on the right track.

We added in a 4 stride then, which went well as long as P was listening. My leg is much better, according to Trainer B, and I really do feel a lot more solid. All #winning.

Friday I went out to go try my new half pad, and just played with the canter for a few minutes to see how P went, and to the right everything was great, to the left it was meh. But I had to go, so there was no time to sort anything out. He got Saturday and Sunday off because no thanks to riding with kids around, so today we start another week. 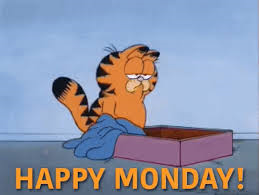 Tomorrow we get to go see Trainer J to get more help in the canter, where of course P will be perfect and she’ll say we don’t even need to work on anything. Then we see Trainer B again on Friday where we can hopefully jump all the things. Because Sunday we’re heading to play in Jumper Land! I still hate to be missing a horse trial, but it’s still the most sensible thing to do.

In the meantime, P was totally off his selfie game the other day, so enjoy my horse looking stoned, drunk and paranoid. 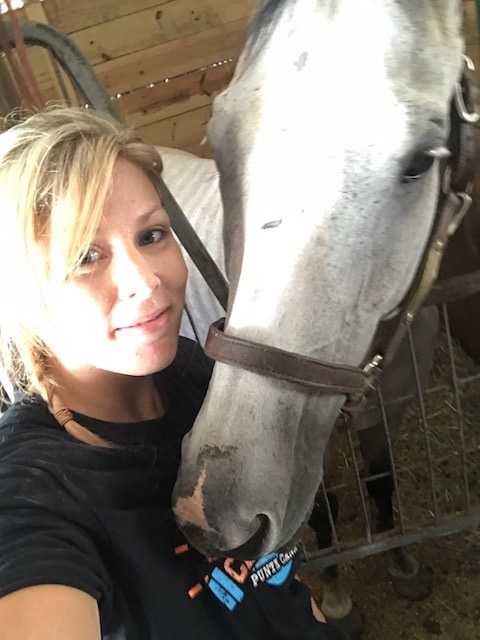 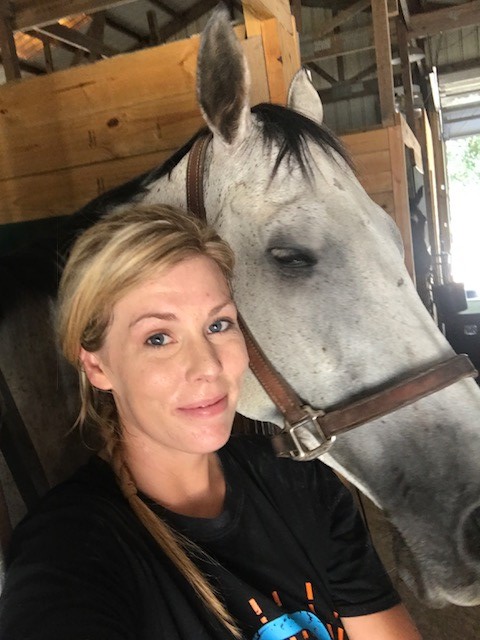