Pretty much zero media from the last couple of weeks because Cambox decided to do this: 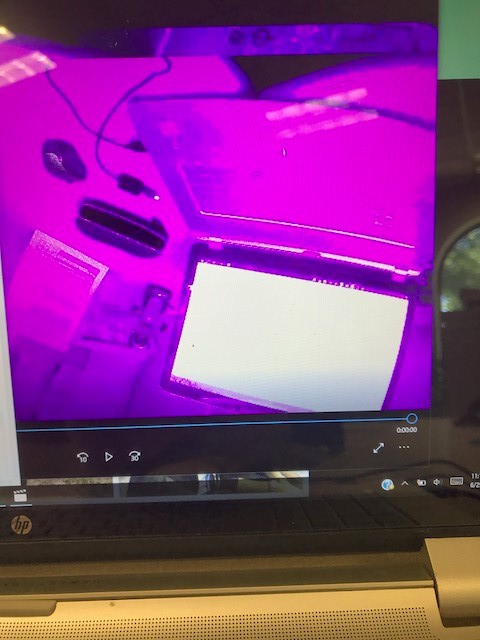 I keep it in a hard case, and haven’t used it much thanks to forgetting it at home repeatedly, so imagine my surprise when I connect it to my computer to make sure the memory was clear before tonight’s ride and this is what I get. I’ve contacted Cambox and they say the American team is going to email me, so hopefully that gets resolved. Because it was $300 big ones and I got it 2 months ago.

I was going to the beach with the family and some friends (who are pretty much family) for 4 whole days, so on Thursday I hopped on P to do mostly flat work, which he was awesome for, then I thought I’d just pop over a small jump that was set up. Said small jump had some plastic jugs underneath as fillers, so naturally P had to stop.

And I came off. Onto the jugs, which scattered and made a lot of noise, and P fled the scene.

So I figure that he’ll run to the barn like a normal horse. Nope. P, goes right instead of left, towards the pastures. Ok, so he’s going to his pasture.

Nope, he reaches the pastures and turns RIGHT, and is now on the driveway leading to the road. So now he’s out of sight and I’m running. Thankfully, a pony rider’s mom pulled up the driveway and I practically threw myself in her car and asked her to drive me down the driveway.

Where we came upon P….calmly walking down the street (which isn’t busy, it’s in a residential neighborhood), TOWARDS THE HIGHWAY.

So I jump out of the car and call his name, P stops and turns around to look at me, then notices there’s grass (he was in someone’s front yard), and gets his leg through the reins.

Thankfully I’ve let P step on his lead rope since I’ve had him, so there was only one minor panicky moment before I reached him and he stood still while I got his leg back to where it belonged.

Then we walked back to the arena, I got back on did some W/T/C and then we popped over the jump again a few times each way. Successfully this time.

But talk about a heart attack. I never even ride him on the driveway, let alone down it, so I have no clue why he’d think to go that way. Here’s a visual of his route: 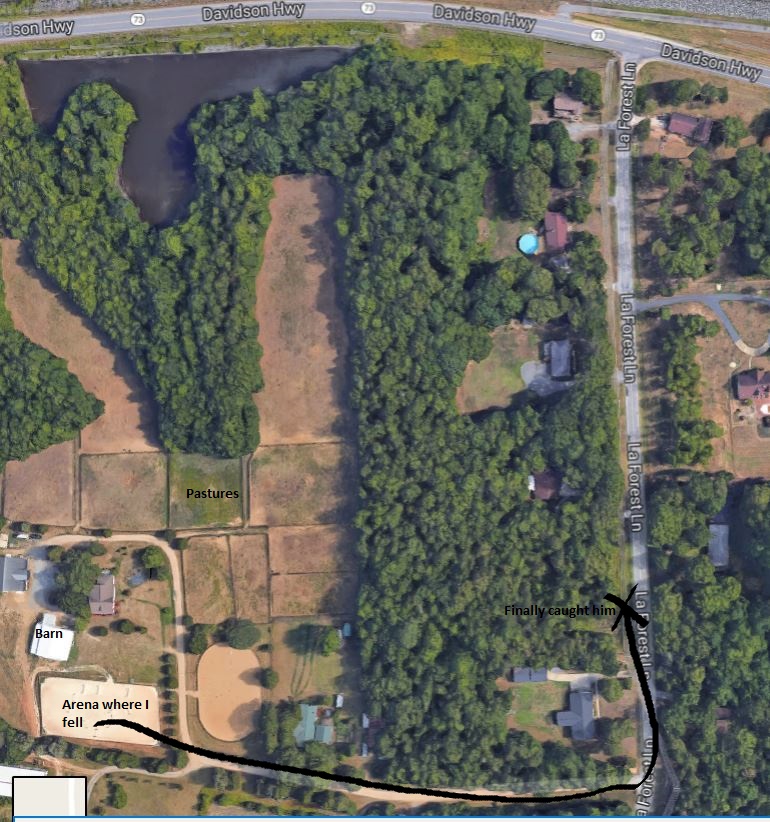 Thank goodness for the pony rider’s mom and her impeccable timing.

So Friday I was supposed to have a lesson with Trainer B, but his flight from Germany back home got cancelled, so BO offered to set up a basic gymnastic and school us through it.

While I waited for BO, I warmed up W/T/C and some jumps. And P was awesome- super quiet and listening well. So I thought that boded well.

And it did, until the other horse who was in the arena went in and the workers started feeding in the barn. Then P’s attitude went to shit. He was super forward, nervous and pissy, which in turn was getting to me and I was a bit clutch-y.

We started with just 3 canter poles, then she raised the middle pole to a 2’3″ vertical. One thing BO said that stuck with me was to look at the exercise, and to ignore him. And that worked to some extent. When I didn’t stare at his ears and just looked at where we were supposed to go, we got there with a lot less wiggling. It was still irritating though. I work through lunch all the time. Life will go on.

I rode him again Saturday morning before we left for the beach, but it had rained so much and jumping wasn’t going to happen. So I set up the 3 canter poles again and just cantered back and forth. And he was fantastic.

Then I left and hardly thought about horses for 4 days. Because I was too busy making sure my daredevil 3 year old didn’t drown.

And spending time with Husband before he left again for work on Tuesday. 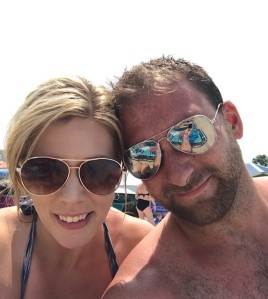 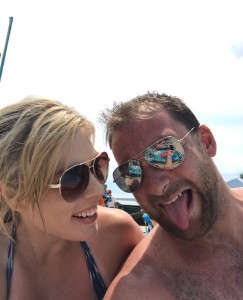 The kids and I dropped Husband off at the airport and headed home Tuesday night because I had a lesson scheduled with Trainer B for Wednesday afternoon. The new trainer at my barn was able to ride P on Monday, but that meant P had Tuesday off. New trainer is an awesome rider (used to work for G. Morris) so I knew he was in good hands. But she’s gone at a horse show so I didn’t get a chance before I left for Trainer B’s to see how he had been. Many of you are probably all, “The horse got a day off, what’s the big deal?”

Well, it can pretty much make or break a ride.

And yesterday it was broken.

Since Cambox is out of commission and Husband is gone, there’s no video. Which is probably a good thing because I fell off again. This time because P teeter-tottered in front of a CROSS-RAIL before slamming to a stop. And leany ol’ me just couldn’t hang on.

So Trainer B says, “If you get your feet out in front of you, you won’t fall.”

To which I responded, “Listen, bro, I’ve been trying that. I see pictures of me jumping and I hate them all. My legs ALWAYS slip back. I’ve bought a new saddle, bought new stirrups, focused solely on keeping my legs at the girth, read books, watched videos, tried to imagine a seatbelt keeping my hips back (thanks CR2), kept my shoulders away at the jump, and more. Fix me!”

And he goes, “Ok, since Pilgrim obviously is too emotional to do much anyway, let’s just work on position.”

Was it perfect? No. Did I get it right every time? No. But did I finally feel the correct way to jump? YES.

So back and forth over a few cross-rails and gates we went. Just at the trot, although a couple at the canter because I literally couldn’t stop my horse. And then we went out of the arena and over into their field where they have some XC jumps set up, and he just had us trot some jumps, faux ditches, up and down a tall mound, etc. Just to give P some different scenery.

And P was in rare form. Well, actually not so rare. He stopped at everything. Even when there was nothing to stop at, he stopped. Trainer B said, “He sure is a funny horse. When he’s out of control and freaked out, he jumps. When he seems to have calmed down and is listening, he stops.” And it’s true. He rarely dirty stops. I can usually feel it coming, but no amount of putting my leg on keeps him going.

I feel like I’ve tried a lot to overcome the issue. I’ve changed saddles, changed bits, worked with literally some of the best trainers, and some days it’s not an issue and some days it’s a huge issue. There are some other things going on- P absolutely despises being groomed, being bathed, being tacked up. His saddle fits, he gets magnawaved every month, he has a memory foam half pad…He’ll be great flatting, then turn into a different horse when jumping or being asked to work. He’s not punished when he stops….he’s asked to back up and go again. By now he knows it’s more work for him when he stops, and he’s not a dumb horse at all.

So I’m going to say it- I suspect ulcers. I actually HOPE it’s ulcers because that would mean an explanation. I’ve thought that before, but then he’ll give me a great ride, and I’ll forget about it. When the barn’s trainer rode him on Monday, she said he was great, then bolted, then was great, then bolted, then was great again. The spooking came out of nowhere and ended as quickly as they came on.

He just gets so anxious sometimes, and can be so spooky, but based on his impeccable ground manners and overall loveable personality, there’s got to be a reason why. 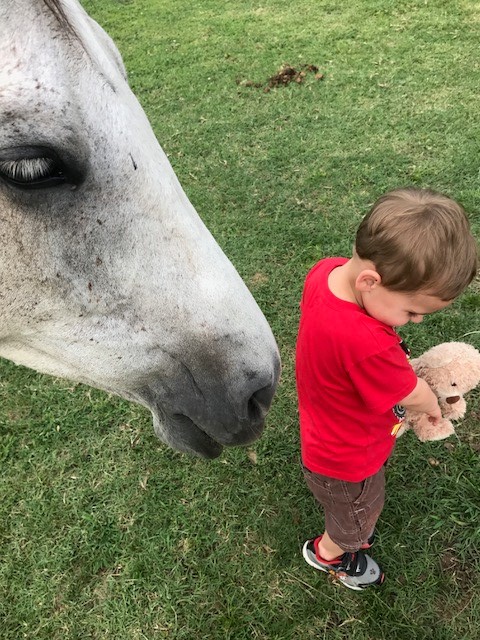 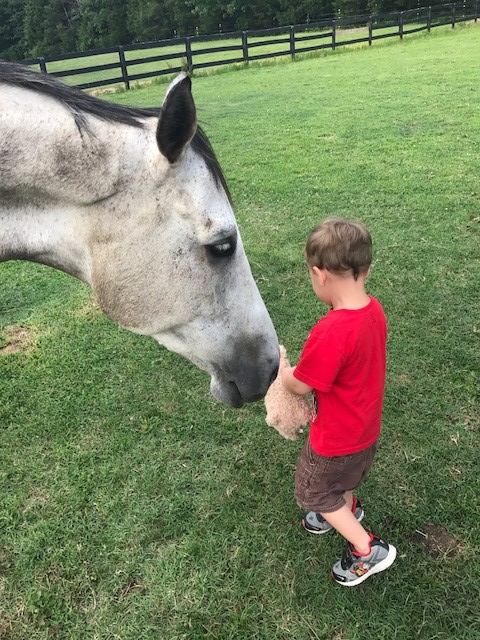 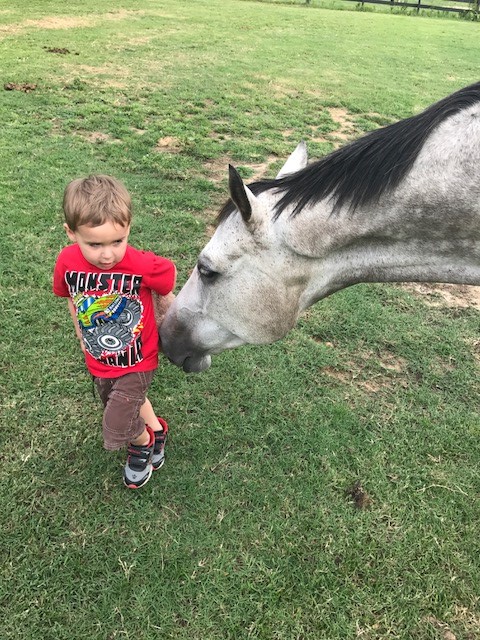 When I trailered up to Trainer B’s, he came off the trailer as calm and cool as could be, like usual. He’s not a fan of being girthed, but once it’s on he’s fine. He was also fine warming up. Then the anxiety came when after we had jumped like 3x. Could it be because I suck? Possibly, but I’m not sure that’s all there is to it. Because when we go to Trainer J’s for dressage, it’s super rare for him to act like that. I think he’s spooked approximately 1 time in all the lessons we’ve had there.

I’m leaving the office early to go ride P, then take a lesson with BO on her school horse and hopefully solidify my newfound jump position. My legs are SORE from yesterday, because those were all new muscles, but I’m glad because it means it’s right. 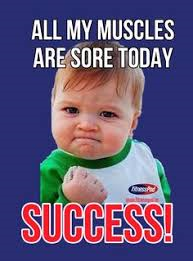 15 thoughts on “Back from vacay; another day, another fall”