Yesterday I had my final lesson with Trainer B before heading to Carolina Horse Park tomorrow. I was in Chicago over the weekend to run a Spartan race with my sister, so BO rode P twice and said he was sane (whoop!), then Monday my board meeting ran late so I figured it’d be fine to skip riding that night since I’d be able to get on Tuesday.

P had other plans.

The farrier couldn’t get out until Wednesday morning, so I tried to take a lesson from BO on one of her school horses, but about 10 minutes in the temperature dropped 20 degrees and this insane storm came out of nowhere.

So because of that, the horses stayed in that night (they’re on night turnout due to the heat) after already being in all day. On Wednesday I had to pull out of the barn by 12:30 to be at my lesson on time and they finished shoeing him at 12:20. So now my horse has not only not been ridden in 2 days, but he’s been inside for 36 hours.

This will definitely go well.

As soon as we headed up to the arena, I knew it was going to an exciting time. Usually I walk for a few minutes and get control of his shoulders, then we trot and do the same thing, and then do a few laps at the canter each way.

Yesterday we just skipped right to the canter. Ok then.

Trainer B set up a little warmup jump to see what kind of horse came out to play that day- just a pole set on top of some muck buckets and we hopped over it a few times each way.

Then some skinny ground poles to see what happened.

And he was fine. So we headed to the roll top that we’ve previously jumped before.

Aaaaand…refusal. An ever so gentle one, but still. Come on.

So I backed him up and we launched over it, then did it a few more times trying to get him to land straight rather than land to the right.

And then moved onto the lattice gate that, again, we have successfully hopped over before.

Another refusal. So sigh. Back up, Jump. Ok, good.

So then we started putting things together. Roll top to lattice, roll top, gate, lattice. And then introduced a new fence mid-course (not jumping it singly) that he has not jumped before- an oxer with brush in it. And then 4/5 strides to the lattice again, but turn right and then over the C4 cross rail-oxer thing. 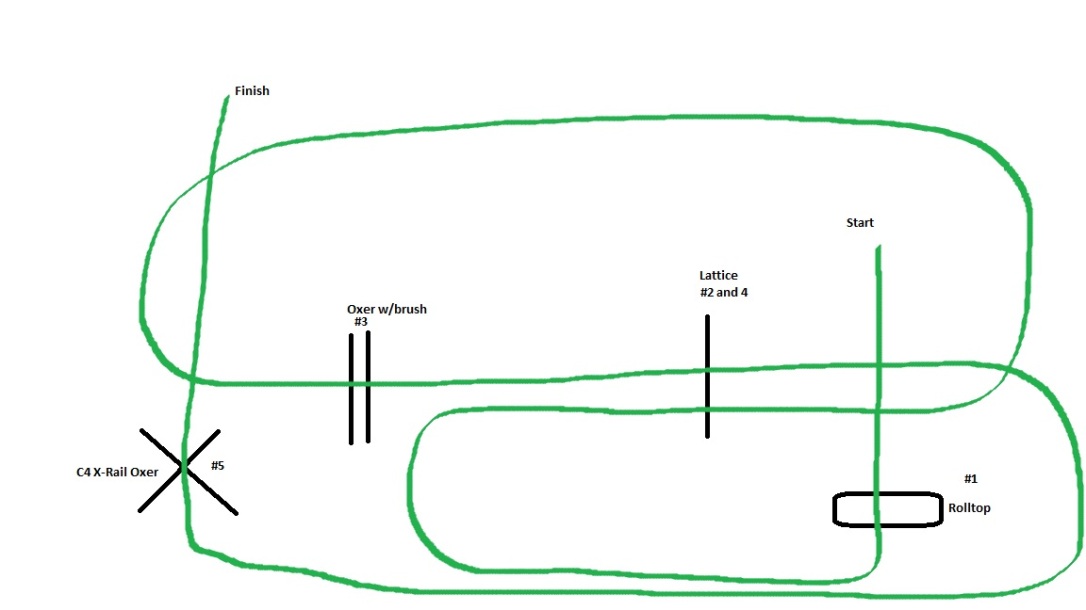 I was pretty sure that P would stop at the brush-filled oxer since it came up quickly out of the turn, and he had just stopped at 2 jumps that I was just trotting to, but he barely hesitated, then powered over it and to the lattice.

One thing that I was struggling with was getting him to listen. He was so freight-trainy and wasn’t listening to any of my aids. It was point, jump, and run, which as we all know, A) isn’t fun and B) will mean mistakes and rails. If he’d had turnout and/or rides in the previous 48 hours I’m sure he would’ve been at least semi-sane, but he was just not wanting to listen or slow down at all.

And side note on my reins. I have the Thinline reins and have loved them faithfully. But the last few rides I’ve struggled with grip- my lesson with Trainer B when it was pouring and then XC schooling at Wind Ridge when P was all sweaty, I just couldn’t keep a hold of them. Both times I rode without gloves (I hate gloves), so I figured I’d throw them on for this lesson since it was guaranteed to be a sweaty one, but of course couldn’t find one of my gloves. Ugh. Anyway, if anyone has suggestions for reins that don’t slip when wet, please throw them at me. I hate laced and webbed. That is all.

Or maybe I should just wear gloves. I just need to find the other one!

Back to the lesson. We struggled a lot with the 4/5 stride between the oxer and the lattice. P would land over the oxer and RUN, all crazy horse style, while I tried to gain some semblance of control. So at first Trainer B was having me half halt in between, but all that was happening was P was landing and bracing so he could ignore me, and then that led to a fight over the lattice.

So he said that with P, to just soften when we landed off the oxer and let P figure it out for himself, even if he ran into it.

But I did what he said and when we landed off the oxer, I just kept my hands soft and P did a perfect 4 strides. So Trainer B goes, “damn, I guess that was good but I was hoping he’d make a mistake so he could learn from it.”

P was probably trying to hide a smirk.

But then the thing to fix was P’s turning. On the right turn after landing off the lattice. P was dropping his right shoulder, barreling through my right leg and honestly felt like he was going to go down. So Trainer B said to come off the lattice and hold the left rein, so that he was pretty much counterbent going through the turn. So I did…and P was NOT HAPPY.

He did some weird pogo stick thing where his left leg was battering my left ankle. The same left ankle that was broken. And it hurt so much I had to pull him up and take it out of the stirrup. And there was popping.

So we talked for a few minutes, then my ankle felt better so I stuck it back in the stirrup and we went back to work, this time doing the entire course. So we come off the rolltop and he digs in, I hold the outside rein and he does the pogo stick thing, but only rams my ankle like 3x so I kept going. Then we do the rest and come off the lattice and go right, and again P just took my correction to the extreme and my ankle took another beating. I had to stop at that point, it was throbbing.

Here is what was edited out of the last video. Because I put it on social media and didn’t want to get a call from my mom going, “WTF is your horse doing? Is that safe? Think about your kids!”

And here is my POV. It started so well…

The jumps themselves were great. The course minus those 2 spots were great. So as a whole, I’m thrilled with yesterday. We talked afterwards and he said P is just such a sensitive horse (I know), and he’s very extreme, it’s hard to get a consistent ride out of him. He either is going too fast when he needs to be slower, or he’s going to slow and then needs to be moved up. This of course was really exacerbated by the lack of riding and turnout the last few days- when I say P needs a solid 6 days of work to stay sane, I’m not being dramatic, it’s how it is. So it’s finding that balance of keeping him forward without running and collecting him without him getting stuck behind, and that will come with practice.

Today P got his magnawave session in. My friends own a magnawave business, so I texted the one who was coming out to do him that he jumped a lot yesterday and she sent me this about 5 minutes into it:

I wish I had spent the magnawave session on me- my ankle is still giving me some issues. It’s a bit swollen so I’m in flats today and have it elevated on a chair. I’ll have to remember to pack some ice and ibuprofen- tomorrow we leave!

5 thoughts on “Pilgrim the Ankle Beater”