Let’s just get that out of the way.

It was also the best ride hands down I’ve had in months.

The rain started the night before and everything was drenched. I had a lesson scheduled for 2 and there was a 100% chance of rain, with the radar showing the orange stuff hovering over where I’d be at my lesson time.

Did I particularly WANT to ride? No.

Was I going to tell this guy that? NO.

But just to be on the safe side, before I went through the trouble of getting on the road, I wanted to be sure this was happening. 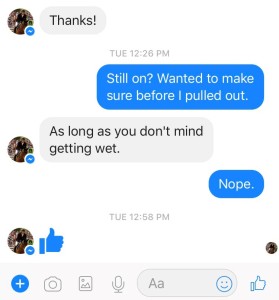 So if you recall from last week, we spent the hour attempting to tame the beast by walking and sometimes trotting over a cross rail and a tiny plank. Back and forth, back and forth. Because calmness, guys. I hear it’s a thing? Maybe with your horses…

So Trainer B sets up 2 small cavaletti blocks with a rail across and we trot over it a few times. And miracle of all miracles, there’s no leaping or bolting or refusing. So then he walks over to a green rolltop that’s about 2’6″ and goes, “Is this too big?”

So we trot up to it and…refusal.

So we try again and P launches over it. So we do it again until it’s acceptable, then we move to a gate, then do both the gate to the rolltop. 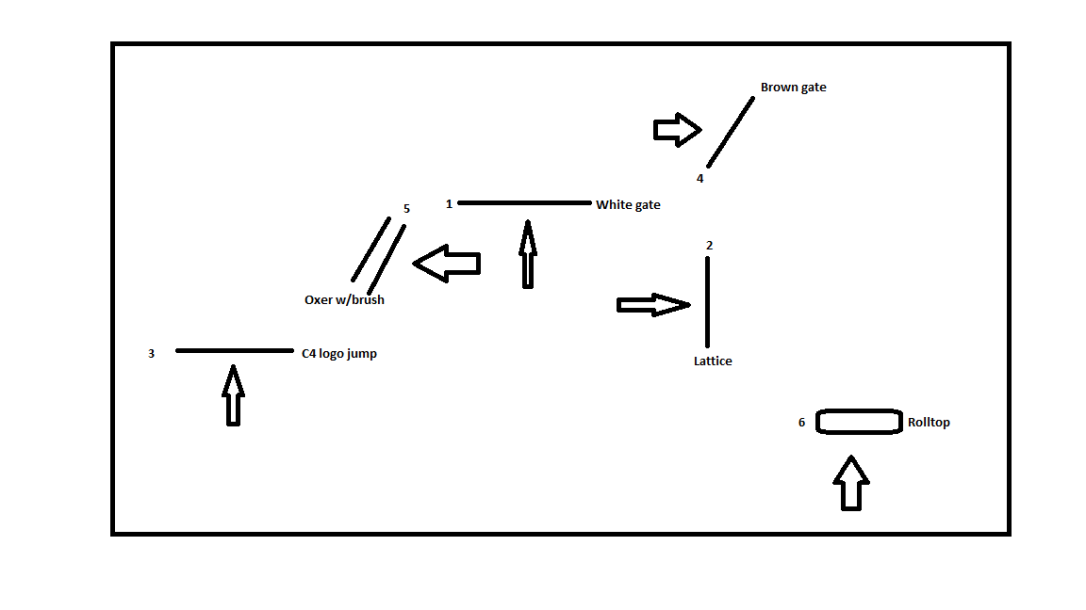 And it was awesome.

Trainer B said P has a really adjustable canter (dressage bootcamp for the win!), but rather than adjust 5 strides before, which is what I was doing when I saw a distance, adjust him 10 strides out…make his canter do something, anything, different. Then I’m not nitpicking him or having to make so many last second decisions.

And that completely worked for P. I had a nice canter through the turns, and he stayed in rhythm even on straightaways rather than pick up speed and become a freight train.

So then let me tell you what I did. Because surely this was too simple of a solution…let’s see how KC can screw it up.

Jump 6 was the rolltop but we were jumping it backwards and it came up quickly off the turn from the rail. So after jumping 5, which led to a sharp left turn, I was to adjust him on the short side of the area, then again on the long side. Then just let him float through the turn to the rolltop and jump. 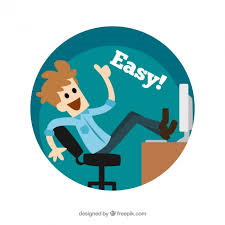 So we land off jump 5…all goes according to plan. Gave P a half halt along the short side, again on the long side, then ALL I HAD TO DO was sit there and jump the jump.

Let’s pick at you 2 strides before just for funsies.

And P was all, “You go ahead witcha bad self. Imma stay here while you make up your mind.”

So he stopped and I jumped the jump.

Aka, fell. Thus the…

And it was so cold and so wet. And I had GGT footing stuck all over me.

And my horse just standing there next to the jump like, “Why you paying this guy if you don’t listen? JUST SIT THERE MEANS JUST SIT THERE.”

I totally deserved the stop. I was fine and P was fine (and probably laughing at me underneath his fly bonnet). So I climbed back up, we walked a second and this is what Trainer B told me:

“You do great riding the course. All the sharp turns, the rollback, adjusting the canter for what you need, you’re doing all of it right. Until you get a couple strides away from the jump and you try to ride for him. So do the course again, but pick up your canter in a new spot, do a circle around a jump or 2 and pretend like you’ve already jumped a jump before going to jump 1. Before each jump, when you feel like you want to jump, think “WAIT” then go for it.

And so I did, P did, and we were freaking phenomenal. I didn’t jump ahead or get left behind on a single one. So we did it a few more times, then I messed up to the stupid rolltop again by giving P too strong of a half halt before the turn, and he broke to the trot and then had to launch awkwardly over it. So we did it a few more times until it was smoothed out, did the course again, and called it a day.

I was grinning ear to ear at the end (probably during most of the lesson as well) and said that was great for being the first time I’ve seriously jumped P since November or so, and definitely the first time I’ve jumped a course with him in as long. And so he said, “Wait, really? Ok, then you two will be back in no time.”

And I did a happy dance inside.

I’m sure P felt super betrayed. I mean, the last time we were here he walked a couple jumps, and now we had just spent an hour over 2’6″ courses. Sorry buddy. But it was the most confidence boosting ride I’ve had on him so far after getting him back. And bonus, the jumps looked tiny. After the rolltop question, I didn’t even give any thought to the height. So much #winning going on here.