Since our conquering of the terrifying 3’3″, rides with P have not been great. I can honestly say I have no idea what goes through my horse’s mind. Since I have to work to continue to provide the cushy lifestyle Pilgrim is now accustomed to, riding has to happen after work. Unfortunately, BO/resident trainer works FT as well, which means lessons are from 5:30-6:30 and 6:0-7:30. While there are technically 3 arenas, only 1 is really usable. The main schooling arena was already existing when they moved in nearly 2 years ago and has great footing, but is a little small- especially when there are 7 little girls flying around in it.

When they moved in, they built a second arena to be the jump arena, but it has some issues so it’s been unusable for the last few months. They do have an appointment in May to have this fixed, so there’s a light at the end of the tunnel.

They also have a very small indoor which is wonderful for cavaletti exercises and w/t. It’s not the best for cantering, and I’ll only do it if P is feeling particularly balanced that day. It’s also a little bit out of the way, so I don’t like riding in it alone, though riding with others is a little tricky due to the size. But it’s still an indoor so I’ll stop complaining now.

So we’ve been riding during lessons, which can be problematic for Princess P. It’s not all his fault- sometimes there are so many riders that I’ll have to sharply turn him in order to avoid someone, and we usually end up just doing the exercises that the trainer is having the riders do because doing our own thing confuses the others, but P has had enough. He’s always been ok in warmup at shows with other horses, but lately he’s started to pin his ears and even try to kick a few times.

The other thing that holds us back is P is SO.DAMN.SPOOKY. But he’s spooky at home. When we go to a show, lesson, clinic or trail riding, he’s a champion. 99% of the time nothing bothers him. At home, his brain falls out of his head more often than it remains in place. And that’s no fun. I feel like we never get any work done at home, but we go to lessons and really progress, then we do well at shows. But think of how much BETTER the lessons and shows could be if we could practice and build our skills at home? It’s a bit discouraging sometimes.

Anyways, so our rides have not been great. We do have a lesson with trainer D on Wednesday afternoon, and I’m hoping to get some tips from her. Maybe it’s me. Hell, it’s probably me, but I’ve been consciously working on making sure he’s on a loose rein and that my position is correct, so I don’t know. I suppose that’s why I pay the pros…

I’ve been scouring all the tack sites for dressage saddles and I may have struck gold, but that will be determined this week. Trainer J (dressage trainer) loves her some David Stackhouse, but we both agreed that a $5k custom saddle was not the way to go for my still-not-fully-developed pony (my bank account was wildly nodding in agreement as well). Since P’s jump saddle is a CWD, I was looking for a Devoucoux to start off the inevitable fitting trials, but came across a used Stackhouse in just my size and in just my price range.

So I ordered that little guy right away and it arrived Thursday afternoon. I actually left work early so that I could stop at home to get it and take it to the barn. I first put it on with no pads, then added my usual BoT and Mattes pads and it looked pretty good.

Feeling hopeful that I possibly hadn’t wasted $100 in shipping, I finished tacking P up. While I was grooming him, I thought his right hind (the source of the 2 abscesses earlier this year) looked a little puffy, but he was standing on it fine and politely gave it to me to pick out, so I figured it was just my imagination and headed to the arena, where there were 6 little girls cantering around like crazy.  But I really needed to make sure the saddle was a good fit for ME before calling trainer J, so I headed on in, got on and walked off. The saddle doesn’t have the crazy huge knee blocks that my HDR does, so it felt a lot different, but after lengthening my stirrups a hole, it felt pretty good. I walked around a few more minutes and then asked him to trot and he immediately felt lame. So I picked a straightaway line down the middle of the arena and asked for the trot again. Yep. Definitely lame.

I jumped off and felt down his right hind and it felt puffy on the sides and along the cannon bone just below the hock all the way to the fetlock. It looked slightly puffy also, but there was no heat. So I cold hosed and poulticed the beast (which made him hold his leg not up, but sideways for a good 2 minutes), gave him some bute and sadly packed Mr. Stackhouse away.

The next morning, the BO texted me and told me the swelling was down a bit but not completely gone, and that when turned out, he gimped off at the trot for a few steps before settling down to graze. She suggested that if the swelling isn’t gone by Monday, to call the vet and I agreed. Then all day at work, I had visions of tendon tears, strains, broken legs (thanks, Jester) and other terrible things, so I called local vets to see if anyone could get him in. Finally one had availability (a good one, too, though not his normal vet) so I told my assistant to clear my schedule for the afternoon and headed to the barn to pick up P. I hooked up the trailer and went to the pasture and, what’s that? A sound horse with a normal looking leg? Of course it is.

First I ran around the pasture looking like an insane person (luckily no one was there) and he trotted off after me just fine. So I put him on the lunge and while he 100% no-doubt-about-it sound to the right, to the left there were a few steps here and there that I was like

so to be on the safe side, I decided to keep the appointment.

I trailered up to the vet and he did all sorts of things- hoof testers, flexed, lunged…P was perfectly fine. The only thing he could find that may be somewhat related was the scratches on that leg (that leg is cursed, I swear) and that I have been unsuccessful thus far in treating. So he mixed together a scratches formula he said he’s had good luck with and sent me on my way, after charging me $205. So $205 for some medication that, according to the invoice, costs $55. Thanks Pilgrim.

I’m glad I went, because if I hadn’t, I’m sure that Saturday morning would’ve dawned with Pilgrim’s leg 5x its normal size and a for-sure tendon rip. So better to be safe than sorry, and I figure I paid for the peace of mind, which is worth it on its own. But I am certain that Pilgrim has seen the vet more times this year than I, my kids, my husband and my other pets have been seen by doctors/vets. Love horses.

Saturday there was no riding because Matt and I ran in the Spartan Sprint, which was 5 miles of mud and wind and water and all sorts of obstacles that were super fun. We ran with a team from our crossfit box and had a complete blast. I’m flying to Chicago in June to run one with my sister and I can’t wait! 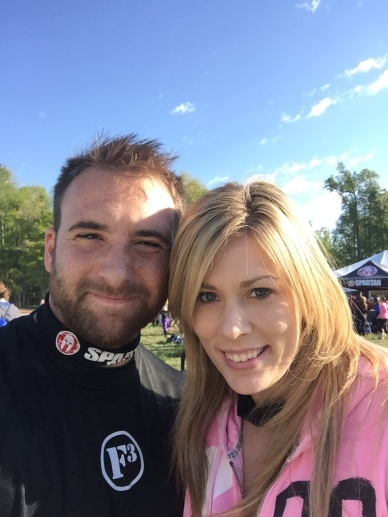 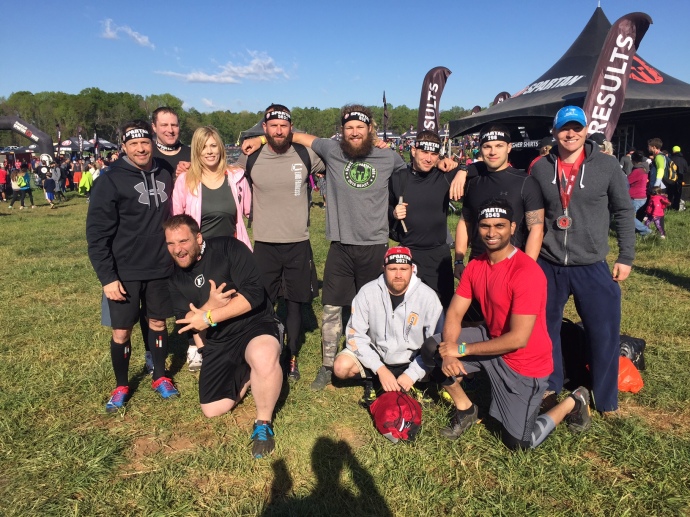 Yesterday my husband spontaneously took me to watch xc day of The Fork HT CIC3* and it was definitely worth missing another ride for. I was able to watch Boyd Martin, Buck Davidson, Allison Springer, Phillip Dutton, Maya Black, and countless others warmup, run xc, and cool off. It was so freaking cool. My husband told Boyd to “have a good ride” on his way out of warmup, to which  Boyd replied, “thank you, sir” and I was over the moon. I also got to watch him ride a pretty nasty spook on Crackerjack. Hint- he doesn’t curl into the fetal position. Must remember this.

Of course, the kids enjoyed every second of it…hunched over their respective electronics. 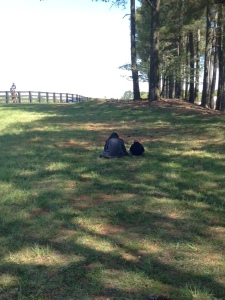 Matt loved the xc course- the last combination on course was a shotgun and shotgun shell so of course he wanted to watch that jump.

Too bad the boys couldn’t hack it on the way home. 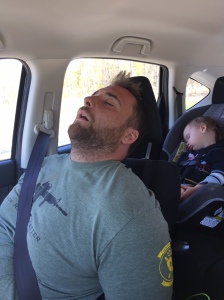 I did lunge P last night in the Stackhouse, adding cavaletti in and making him go through it repeatedly until he could do so calmly- I think between both directions, he probably trotted those poles at least 60 times. But at least he was sound! Tonight the Stackhouse is coming back out so we can do a complete test ride in it. The true test will be cantering- can my leg stay in the correct position or will it be back by his stifle, like in the HDR? We shall see!